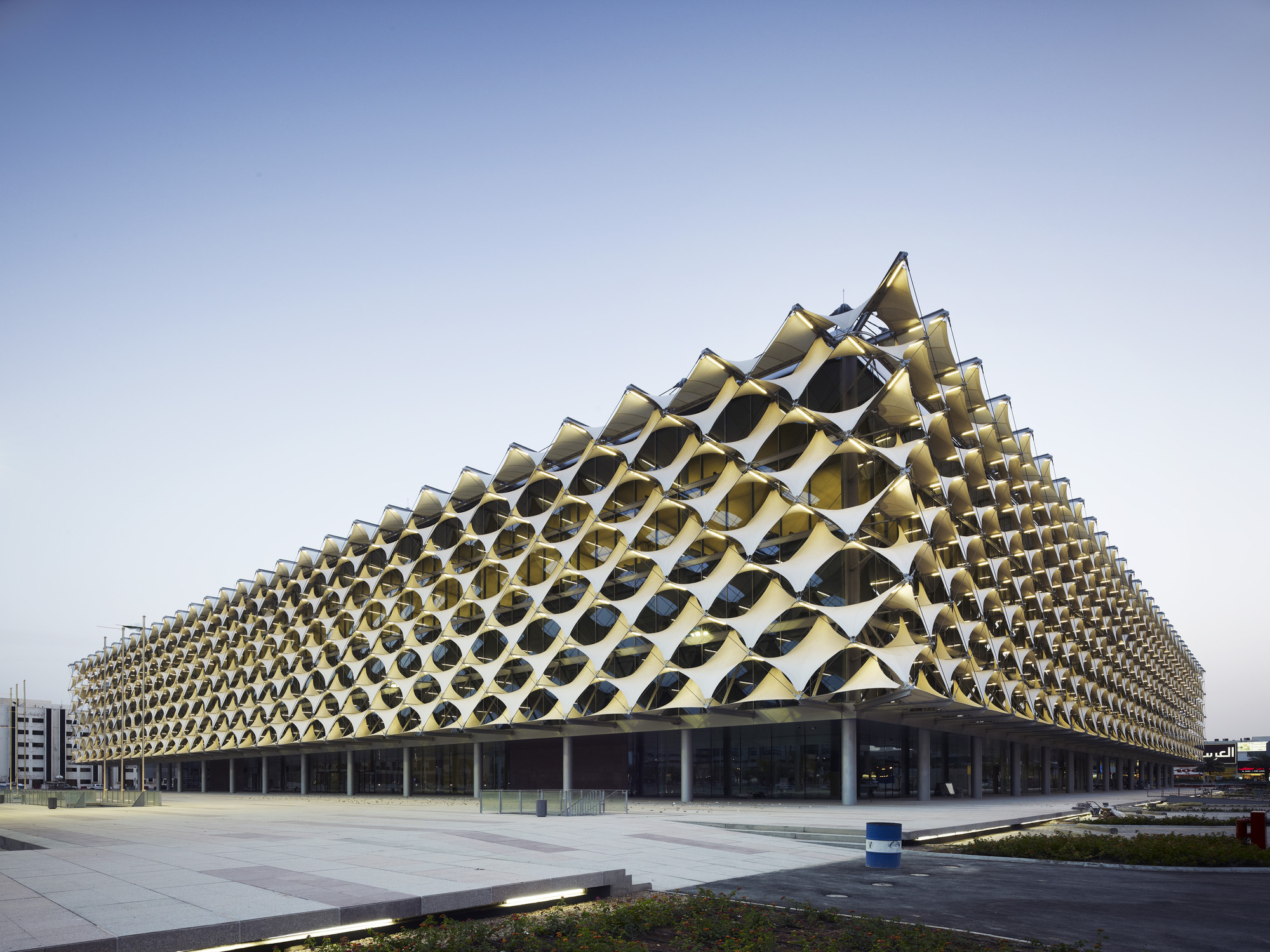 Gerber Architekten is a German practice with national and international projects in architecture, landscape design, interior design and urban design. The projects range from office and high-rise buildings, buildings for science and research, laboratories and institutes, buildings for art and culture, residential buildings through to infrastructure buildings.

The King Fahad National Library with its public plaza represents the new center of the rapidly changing Olaya District in Riyadh. The cultural importance of the building is emphasized by its scale, which clearly distincts it from the heterogeneous small scale building pattern of the surrounding district. Like a treasure box, the four storey extension encloses the existing building and creates a new single entity. The existing building in the center is now containing the archives with over two million books and the main entrance opens to the public plaza. In its lobby, a panoramic escalator leads the visitor to what was formerly the roof of the old library and now is combined with the top level of the new structure to form the generous reading area with open stacks. Across this double-height top floor, a large new roof spans over the old and new building. Skylights in the roof with daylight systems and a translucent membrane underneath filter daylight into the reading room and down to the entrance level.

The facades are protected from the sun by a filigree textile screen following traditional Middle Eastern architectural patterns and the tradition of regional tent structures and linking them with state of the art technology. This screen protects the interior from the direct sun while at the same time allowing good daylight conditions and visual connections to the surroundings.

Thomas Lücking is born in 1971 in Munich and has been Managing Director of Gerber Architekten international GmbH since 2007. After earning his architectural degree in 2000 from the Technical University of Munich, he worked for Gerber Architekten in Dortmund where he focused on the international projects among which is the award winning King Fahad National Library. To lead its construction supervision he lived from 2009 to 2011 in the Kingdom of Saudi Arabia where he also established there the first representative office for Gerber Architekten and was responsible for business development in the MENA Region. In 2012, he moved back to Germany to establish for Gerber Architekten the Berlin office which counts now more than 40 architects. Since then he has been leading as Design Director numerous projects in Saudi Arabia, such as the Olaya Iconic Metro Station in Riyadh, the Haram Iconic Metro Station in Makkah and Al-Faisal University Campus in Jeddah. Thomas Lucking also occupied an academic position at the University of Wuppertal, Germany where he made teaching contributions in the Faculty of Design and Building Structures.

Office Profile Gerber Architekten is one of Germany’s leading architecture firms. Founded in 1966 by Professor Eckhard Gerber, the firm is specialized in the design of innovative and efficient architecture and offers the entire range of design services from early concept to the final detailed design of buildings, always with a strong focus on sustainability. Gerber Architekten is a founding member of the German Sustainable Building Council and a member of EGNATON e.V., the European Association for Sustainable Laboratories. With 50 years of expertise across all project stages, the firm operates worldwide where it has realized a number of high-profile projects for governmental and private clients, including metro stations, high-rise office towers, schools, universities, science and research facilities as well as cultural buildings. Based in Dortmund with branches in Hamburg, Berlin, Shanghai and a permanent representation in Riyadh-Saudi Arabia, a team of 200 internationally experienced architects, construction and project managers forms a dynamic company able to respond swiftly, communicate effectively and offer its clients an efficient and decisive design process.

The philosophy of Gerber Architekten consider that architecture goes beyond the functional provision of space and accessibility while it presents an opportunity to enhance surroundings and express aspirations. They strive to create built environments that positively impact people, to design better buildings and ultimately, better cities.  As such, they are committed to creating thoughtful architecture that integrates the client’s vision with an understanding of contemporary design and technology, while respecting the local cultural and historical context. By this they seek an architecture that forms a meaningful connection to its place, where each design solution is unique to the particular requirements of the project. It is this commitment that sets them apart, adds value and is reflected in their award-winning approaches.