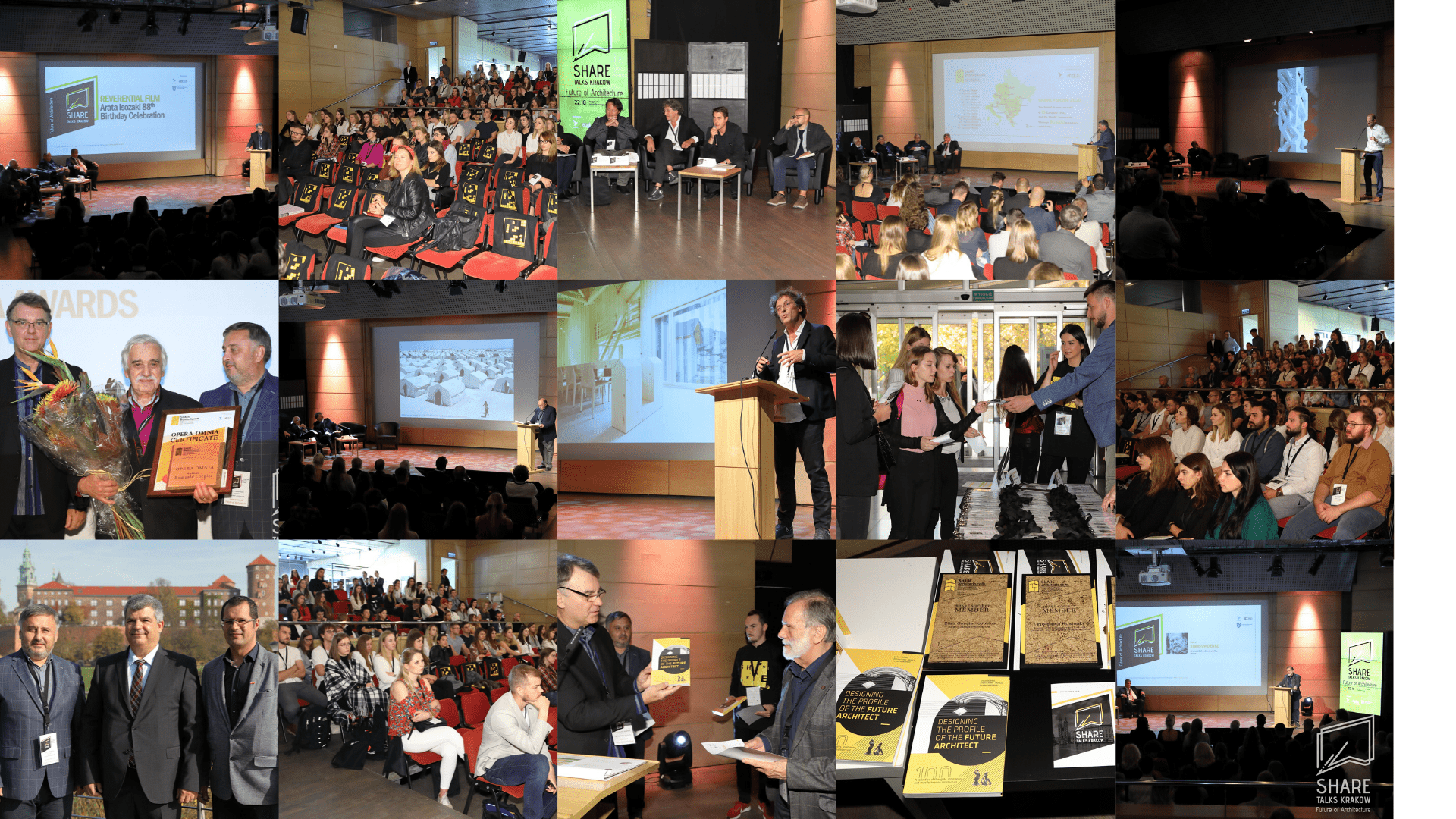 On October 22 we’ve had the honor to organize a different type of SHARE conference in Kraków, at the Manggha Center of Japanese Art and Technology. SHARE Talks Kraków 2019 was themed “the future of architecture” and it was a close-knit event organized alongside The Faculty of Architecture and Fine Arts, Andrzej Frycz Modrzewski Kraków University, with the support of IARP Kraków, SARP Kraków, IARP Katowice, and SARP Katowice.

Our vision for SHARE Talks Kraków was to put together a closeup where our delegates had the opportunity to participate in debates and we discuss more in-depth about what the future holds for architecture. An international panel of speakers joined us on stage to share perspectives and cover project presentations that are truly reshaping the world of architecture.

An important part of the conference was the launch of our much-awaited editorial project at SHARE Architects: the launch of our book, “Designing the Profile of the Future Architect” as well as an 88th Birthday Celebration reverential film on acclaimed Arch. Arata Isozaki; 2019 Pritzker Prize winner and the architect who designed the Manggha Museum of Japanese Art and Technology in Kraków – the very building we’ve hosted SHARE Talks Kraków this past October.  Read on to find out more how the event unfolded.

The official opening session at SHARE Talks Kraków kickstarted with an introductory speech held by our event organizers and guest speakers:

Book Launch – “Designing the Profile of the Future Architect”

Following the opening session, we continued with a presentation on our book launch – “Designing the Profile of the Future Architect”. The first editorial project of SHARE Society, a collection of thoughts, architectural manifestoes, and interviews to which 100 architects from 27 countries have contributed; all of them former speakers at the SHARE conferences during 2018 – 2019.

“Remember – architecture is not mathematics. You can build 100 different buildings on the same plot and each one can be fantastic. Be flexible and open-minded, especially when judging other people’s work. Be stubborn. When you design something, you are convinced about it and what it to be built exactly like this – fight for it. Don’t listen to an investor, contractor or partner [ … ] Don’t be afraid to get paranoid – remember – it is for the sake of architecture.” (Oskar GRABCZEWSKI, Owner, OVO Grabczewscy Architekci – POLAND. Excerpt from the book ‘Designing the Profile of the Future Architect’)

“The word ‘architecture’, according to some of its definitions and etymologies, means a field that connects science and technology with art, and thus with the aesthetics of the material. As a real phenomenon, it creates an image of society’s culture, which depends to a great extent not only on the development of civilization, but also on the material status of society, economy, politics, and the connected social relations. ” – (Stanisław DEŃKO, Director, WIZJA architectural office – POLAND. Excerpt from the book ‘Designing the Profile of the Future Architect’)

The opening panel at SHARE Talks Kraków covered an introductory presentation and speech held by our conference chairman, Arch. Krzysztof INGARDEN, Founder at Ingarden & Ewy Architects – POLAND followed by one of our guest speakers, Arch. Elias CONSTANTOPOULOS, president at the Hellenic Institute of Architecture – GREECE, who also covered a presentation titled “Landscapes of Liquidity”.

The achievements of Arch. Kevan SHAW, Design at Director at KSLD | EFLA Lighting Design – UK, in the field of lighting design consists of more than 700 projects completed worldwide and across a broad range of fields. Notable projects include the Scottish Parliament Debating Chamber, the Ashmolean Museum in Oxford and the Scott Monument in Edinburgh.

Arch. Ewa KURYLOWICZ, General Designer & Vice President at  Kuryłowicz & Associates – POLAND / joined us next on stage with a presentation titled “Kuryłowicz & Associates – today towards tomorrow”. “Architecture stands on two legs: one is Theory and the other one is Practice.” In the eyes of architect Ewa KURYLOWICZ, “the future architect has to know how to communicate. This is a skill that has to be studied.”

Kuryłowicz & Associates provides a comprehensive technical building control by thoroughly controlling the construction and project budget as well as it assumes responsibility for obtaining the building use permit. Owing to the training and education cycle having been intentionally carried out, the company employs ten project managers, whose expertise and talent enable management of the project from the stage of creative concept through to the execution of the structure. Over 100 persons in total are constantly involved in the company’s projects.

Arch. Dean LAH, co-founder at ENOTA – SLOVENIA, opened Plenary Session I with a presentation titled “Natural Systems”. Enota’s team of architects focuses on the research-driven design of the environment where the study of contemporary social organizations and the use of new technologies are interwoven to produce innovative and effective solutions. Enota’s solutions are strongly influenced by research, reinterpretation, and development of social, organizational and design algorithms that derive from nature. The result is always a strong binding of the buildings with the environment that surrounds them.

According to the architect, architecture is a lifelong learning process “especially because every building that we build will last longer than the client […] Don’t take yourself too seriously. This doesn’t mean you shouldn’t take your work seriously.” (From the book “Designing the Profile of the Future Architect).

Upcoming next was Arch. Davide Macullo, founder at Davide Macullo Architects – SWITZERLAND. The work of the studio has received awards, been published and exhibited widely both at home and abroad; in Switzerland, Italy, France, Greece, Germany, Austria, Hungary, Slovenia, Turkey, Russia, China, Korea, Australia, Argentina, Ireland, UK and in the US and has just published SWISSMADEINITALY, which focuses on eight of its residential projects in Ticino.

Arch. Davide Macullo covered a presentation titled “Drawing from Context” with an emphasis celebrating the most beautiful profession in the world – architecture: “the link between the DNA of a place and its future. The first shell out of our body that relates to our senses. We draw the lines and we feed those lines with passion, joy, and reason”. 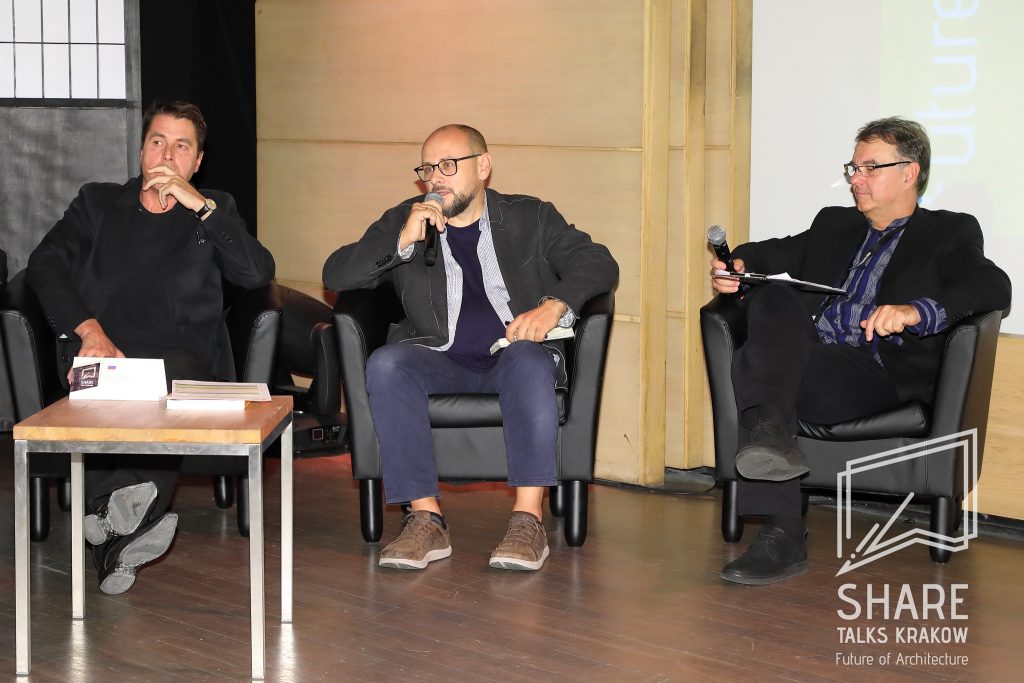 Arch. Anouk LEGENDRE, Founder & Principal at XTU – FRANCE, introduced us to a presentation titled “La Cité du Vin in Bordeaux | France”. “There is a huge revolution taking place in architecture because the organization of the process is changing. It is not architecture anymore, but urbanism. The practice is changing, in terms of scale: from small buildings in the past, up to whole parts of a city nowadays, but all these are collaborative projects …”.

XTU is an award-winning architecture and design firm founded in 2000 by principal architects Anouk Legendre and Nicolas Desmazieres. Located in Paris, France, XTU specializes primarily in academic and environmental research in addition to residential and cultural buildings. The portfolio of the firm displays several museum projects beginning with the Jeongkok Museum in South Korea followed by the Museum of Civilizations on Reunion Island and the Cite du Vin museum in Bordeaux. The firm was also responsible for the French Pavilion at the Milan Expo in 2015. In these projects, XTU explores complex geometries with the integration of parametric design. A free and organic approach encourages the use of a wooden structure synchronized in 3D.

“The Porous City” – MVRDV – The NETHERLANDS

Arch. Gideon MAASLAND, Director at MVRDV – The NETHERLANDS, covered a presentation titled “The Porous City” in which he emphasized, “how can we make buildings and cities more open, more transparent, more human”.

With over 15 years of experience as an architect, Gideon Maasland leads MVRDV’s department for large scale, complex buildings in the Netherlands and abroad. Currently, he coordinates different Dutch projects: the construction of Valley, a 75.000 m2 multifunctional building in the business district of Amsterdam, the construction of two Grotius towers, a 61.800 m2 residential project in the Hague, and the transformation of Jaarbeurs in Utrecht, a trade fair of 170.000 m2.

At this year’s edition of SHARE Talks Kraków 2019, we’ve had the honor to award the SHARE OPERA OMNIA distinction to esteemed architect and professor Romuald LOEGLER for noteworthy accomplishments in architecture.

Blue end of the road

The laudation was made by our conference chairman, Krzysztof Ingarden from INGARDEN & EWÝ. Among some of professor Loegler’s most well-known and appreciated projects, we would like to mention: The Blessed Hedwig’s Church in Kraków (with Jacek Czekaj, 1990), the funeral home “Gateway into the World of Deceased” in Kraków-Batowice (1998), the Jagiellonian Library Annex (1998), Opus Film office building in Lodz, the new complex of the University of Economy in Kraków (1998), the Artur Rubinstein Philharmonic Hall in Lodz (2004) and numerous others.

A big “thank you” to all of our partners and sponsors: ŞIŞECAM FLAT GLASS, Zumtobel Group.