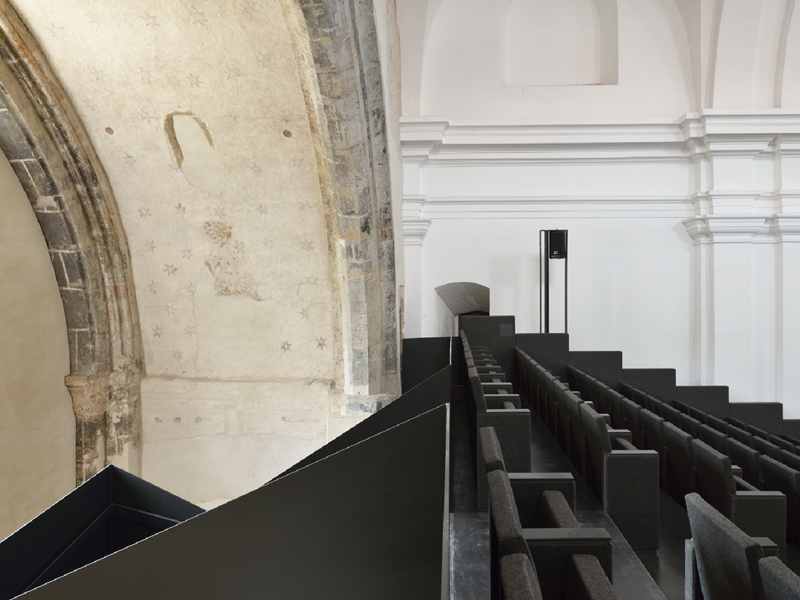 Dean Lah, owner and principal of ENOTA Architecture Office, will be a speaker at GIS Bucharest 2016 (March 22 – 23). He will talk about the restoring a Dominican Monastery into the Ptuj Performance Centre in Ptuj, Slovenia, project which has been nominated for the European Union Prize for Contemporary Architecture Mies van der Rohe Award 2015, has won a Golden Pencil 2014 award and Interior of the Year 2014 award, and these are only to name a few.

The perennial quest for compromise between the demands of conservationists and functional demands of the new content has been taken forward with architectural ideas informed chiefly by the attitudes of respect towards the built and cultural heritage. Intervention is therefore limited exclusively to the surfaces where no new archaeological finds or conservation interventions are expected: the floor. The wall surfaces remain intact and ready for the demanding restoration.

Dean Lah was born in 1971 in Maribor, Slovenia and graduated from the Ljubljana Faculty of Architecture in 1998. In the same year he co-founded the architectural office Enota, where he works as partner architect ever since.
For his work in Enota he received many architectural awards, his work has been presented on numerous exhibitions and published in professional and broad interest publications all over the world. Dean lectures at architectural schools, conferences and symposiums in Slovenia and abroad.

Enota was founded with the ambition to create contemporary and critical architectural practice of an open type based on collective approach to development of architectural and urban solutions. Over the years, Enota has been constantly developing and from the beginnings it has served as creative platform for more than fifty architects.

Constant changes and new complex situations in the world around us drive us to think about new ways of architectural and urban organization. In order to be able to produce answers to those new questions we believe it’s time to surpass the boundaries of conventional discipline set mainly by our cultural backgrounds.

Enota’s team of architects focuses on research driven design of the environment where study of contemporary social organizations and use of new technologies are interwoven to produce innovative and effective solutions. Enota’s solutions are strongly influenced by research, reinterpretation and development of social, organizational and design algorithms that derive from nature. The result is always a strong binding of the buildings with the environment that surrounds them.