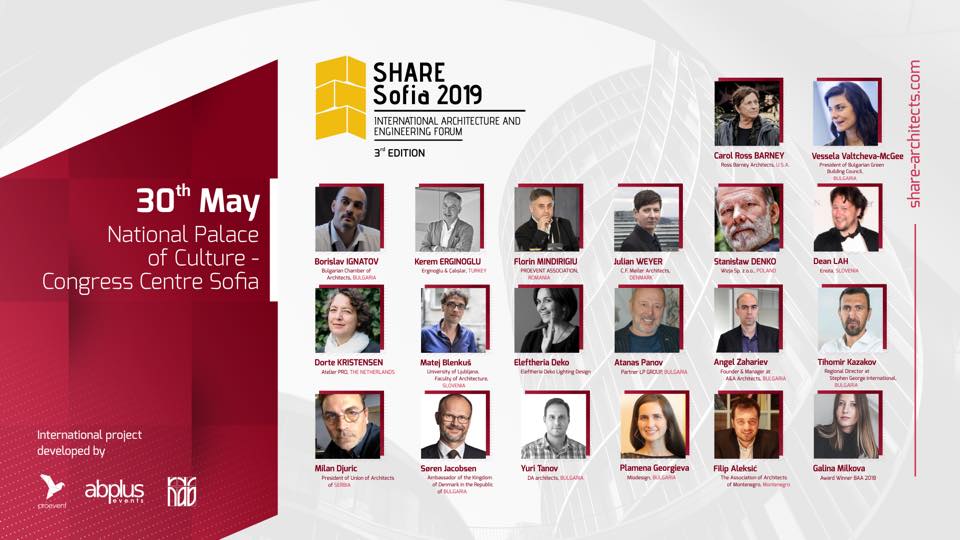 The 3rd edition of SHARE Sofia kickstarts on May 30, 2019. Meet us at the National Palace of Culture – Congress Centre Sofia for an exciting day of award-winning project presentations, debates, and workshops on all things architecture-related and beyond.

Also, this year we will celebrate excellence in architecture with a  2nd edition of Bulgarian Architecture Awards, an ambitious competition targeted at bringing excellence in the design and execution of the built space in Bulgaria.

Members of The Chamber of Architects in Bulgaria (CAB) benefit from a 100% discount upon registration (only available by May 26), based on the discount code received from the association. The discounted price is only for the standard ticket.

Only for young people under 30 years old. The package contains all perks from Standard Ticket.

Buy 2 tickets and get the 3rd one for FREE.

For details on full perks, visit our official ticket page for SHARE Sofia 2019.

IMPORTANT NOTE: To all attendees, we would like to inform you that all presentations will be held in both Bulgarian and English, together with a joint translation to guarantee excellent communication for everyone at the conference.

Petya Avramova is a Minister of Regional Development and Public Works. From 2009 until 2011 she has been a Deputy Mayor for territorial organization, municipal properties, construction and ecology at Vratsa Municipality, and a chairperson of Municipal Council Vratsa between 2011 and 2013. Mrs. Avramova will be honouring with her presence at SHARE Sofia 2019 as a guest speaker.

Carol Ross Barney, founder at Ross Barney Architects, has been in the vanguard of civic space design since founding her architecture office in 1981. With a career that spans over 40 years, Carol has made significant contributions to the built environment, the profession, and architectural education. As an architect, urbanist, mentor, and educator, Carol has relentlessly advocated that excellent design is a right, not a privilege. Her body of work occupies a unique place within the panorama of contemporary architecture, being exclusively composed of work in the public realm. At SHARE Sofia 2019, she will introduce “The new Chicago Riverwalk”, one of her office’s most impactful projects.

Partner at Erginoğlu & Çalışlar Architects, an Istanbul based, independent firm of architects founded in 1993, architect Kerem Erginoğlu will hold a special presentation titled “DEMIRBUKU HOUSES BODRUM” – “a project that embodies our ideas towards how architecture can exist in harmony with nature. My design philosophy and of that of my firm revolves around concepts such as respect and harmony towards our natural resources”.

Architect Julian WEYER, partner at C.F. Møller Architects – DENMARK, and one of our guest speakers will be speaking about “The Heart”; a project centered around culture and communication. The project combines sports spaces with multi-functional and educational facilities, socio-economic work opportunities like café and shop, and counselling offices. The Heart is all about engaging spaces, nordic architecture and social impact.

Founder & director at Wizja Sp. z o.o, Stanislaw DENKO, will hold a presentation on Wizja Architecture Office: Office Building UBM Mogilska 53-55. For designing the UBM Office Building at Mogilska 53-55 Street in Krakow, one of the fundamental directions of the concept was to introduce an element of recognition and originality of form through the shape of the building, particularly visible in long-distance perspective and in close contact with the facility; looking for the semantics for the facility’s function.

Regional Director at Stephen George International , Tihomir Kazakov, will introduce Kamenitsa Park in Plovdiv, a large scale project that will span 130 000 sq.m. It includes residential buildings, offices, commercial areas, sports facilities and a hotel. In the complex, the common area is enriched with a park, playgrounds and pedestrian alleys. 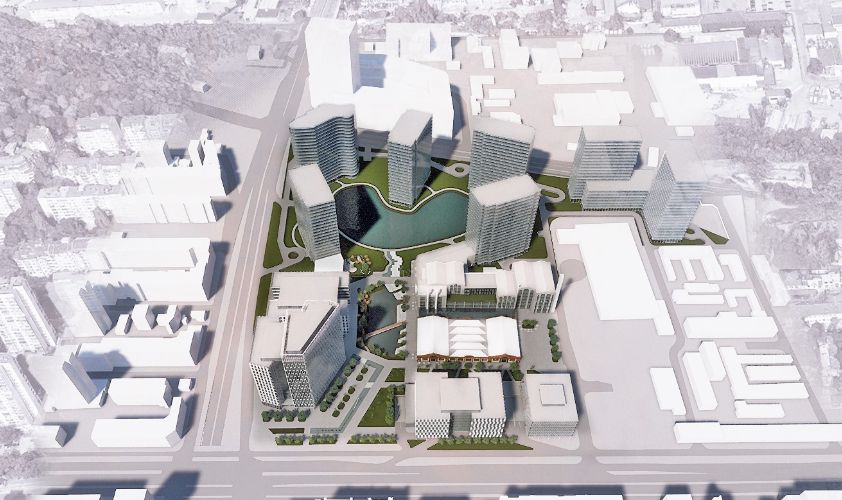 Architect Dean Lah, owner at Enota, highlights that “constant changes and new complex situations in the world around us drive us to think about new architectural and urban solutions. In order to be able to produce answers to those new questions we believe it’s time to surpass the boundaries of conventional discipline set mainly by our cultural backgrounds”. Lah’s presentation at SHARE Sofia 2019 will be about the office’s way of work – “Enota’s team of architects focuses on research driven design of the environment where study of contemporary social organizations and use of new technologies are interwoven to produce innovative and effective solutions”.

Director at Atelier PRO, architect Dorte KRISTENSEN, has always been influenced by Scandinavian architects like Gunnar Asplund, Alvar Aalto and Jørn Utzon. As a consequence, her office leverages a Scandinavian base, while her Danish style perfectly fits in with the ideologies of atelier PRO: austere and robust architecture. Both Dorte and atelier PRO share the belief that buildings are inextricably connected to the environment – “A building needs to enhance the atmosphere and character of the residential environment, so that it can form the foundation of a caring and cultured society. The threshold area design between private and public space is of vital importance, as it is precisely in these areas that people meet each other. Architecture is all about the sharing of experiences.”

CEO & chief architect for Studio Abiro Ltd., Matej Blenkuš is also an associate professor and dean at the Faculty of Architecture, University of Ljubljana, where he teaches Structures and Design Studio. With over 15 years of experience in architectural design, Blenkuš won several notable awards over the years including The Platinum Pencil Award of the Chamber of Architecture and Spatial Planning of Slovenia (ZAPS). Awards of the office include: East Centric Architext Awards 2016 nomination, Architizer A+ Award 2015 – Public Choice Winner, Architizer A+ Award 2016 – Finalist, Maks Fabiani Award 2017, Making Landscape Award 2017, and Plečnik’s Medal 2018.

Architect Milan Đurić, former graduate at the Faculty of Architecture in Belgrade has been an involved with the university since 1994 as an associate professor. Professional practice within DVA:studio. At SHARE Sofia 2019, he will participate at the official opening as a guest speaker.

Well-known for her work in lighting design for the entertainment industry, Eleftheria Deko is the founder of her own studio. Since 1990, she has designed the lighting of more than 450 plays, music and dance performances, operas and art installations for which she has received great reviews and awards, including the “Woman Artist of the Year 2009” for her contribution to the arts and performances as a lighting designer in Greece. After spending five years in New York and pursuing an academic career at N.Y.U., she returned in 1992 to her home country, Greece, where she pioneered in the field of Stage Lighting Design.

We are pleased to announce our attendees that architect Eleftheria Deko will be an official lighting speaker for one of our workshops by Zumtobel Group.

Partner at DA Architects, Yuri Tanov, focuses his work on delivering a high quality designs with strong personality, based on the refined balance between the characteristics of the site and the environment, the functionality, the materials and the details, in order to provide unique aesthetics and identity for each project. Yuri and DA architects team, in general, apply this approach to all of their projects, no matter if it is product design, interior design or buildings design. Tanov’s special presentation at SHARE Sofia 2019 will be titled “Architecture as a positive change”.

Architect Galina Milkova graduated from the University of Architecture, Civil Engineering and Geodesy, Sofia, Bulgaria. She is a master of Architecture and specialized in the “Public Buildings” Department of UACEG. Galina is a scholarship recipient of “EVRIKA” foundation for mastering knowledge in the field of Architecture and a Baumit scholarship recepient for two consecutive years. Her diploma project “Demokratos” was awarded first prize in the world diploma competition Degree&Profession International Awards.

In 2012, Galina articulated Esth-Ethics /ethical aesthetics/ as a new philosophy movement in applied arts which has become the core of her architectural and interactive projects such as “Love Pavilion”, “SALGHT”, and Think Forward educational projects -“CREATIVE ROOM”, “5 ROOMS”, “FUN ROOM”. In 2015 Galina has initiated the SYNC project – a personal exploration of the syncretic unity between poetry and architecture. The interactive installation “Love Pavilion” marked the beginning of SYNC. Galina is also the winner of last year’s edition of Bulgarian Architecture Awards in 2018.

Architect Filip Aleksic, president of the Association of Architects of Montenegro (SACG) will be joining us at SHARE Sofia 2019 as a guest speaker. He will have a special introductory presentation throughout the Official Plenary Session I.

Managing Partner at Triple Green Building Group, Vesella Valtcheva-McGee has extensive experience with sustainability in both practice and education. With over 13 years of experience in sustainable development, she has both practical hands-on experience with sustainability assessment tools and frameworks in the construction and development sector, and deep theoretical knowledge of business sustainability, policy and master-planning, and leadership. Vessela Valtcheva-McGee holds a Master of Architecture degree from the Savannah College of Art and Design where she is an honorary guest lecturer, and a post-graduate diploma in Business Sustainability from Cambridge University.

This year at SHARE Sofia 2019, the SHARE Opera Omnia Distinction will go to architects Atanas Panov (design agency SOFPROEKT in the design atelier of architects Lozan Lozanov and Bogdan Tomalevski and later until 1989 – in Lozan Lozanov’s Architectural Design Office atthe Committee of Culture) and Lorita Panova (Regional Design Agency in the town of Pernik and Lozan Lozanov’s Architectural Design Office at the Committee of Culture), partners at LP Group – Bulgaria; an office that “lives architecture”, well-known for the attention to quality and detail, and for its care to clarity in business relationships through all development phases.

Today, LP Group is a collaboration of several companies, joint around the idea of developing a quality environment. The work style of LP Group is known for the attention to quality and detail, and for its care to clarity in business relationships through all development phases.Many of the projects designed by the bureau are trend-setting for the contemporary Bulgarian architecture. Designs, buildings, and some of the company’s leading architects are laureates and winners of a number of national and international awards, including several Architect of the Yearand Building of the Year Awards, and nominations for the 2005 and 2014Mies van der Rohe Awards / EU Prizes for Contemporary Architecture.

For this year’s special edition of SHARE Sofia 2019, we’ve prepared two workshops you can’t miss out:

The 2nd edition of The Bulgarian Architecture Awards aims to promote the most valuable architectural projects in Bulgaria, to distinguish their architects – the architects and the uniqueness of their idea, with an emphasis on the quality of architecture, aesthetics, used innovations. In addition, there is originality of the concept and sustainability of the project to improve the quality of life; the significance of the social, cultural and economic projects, shaping the modern vision of the cities as part of the architectural heritage of Bulgaria.

Have a closer look at the complete event agenda for SHARE Sofia 2019.