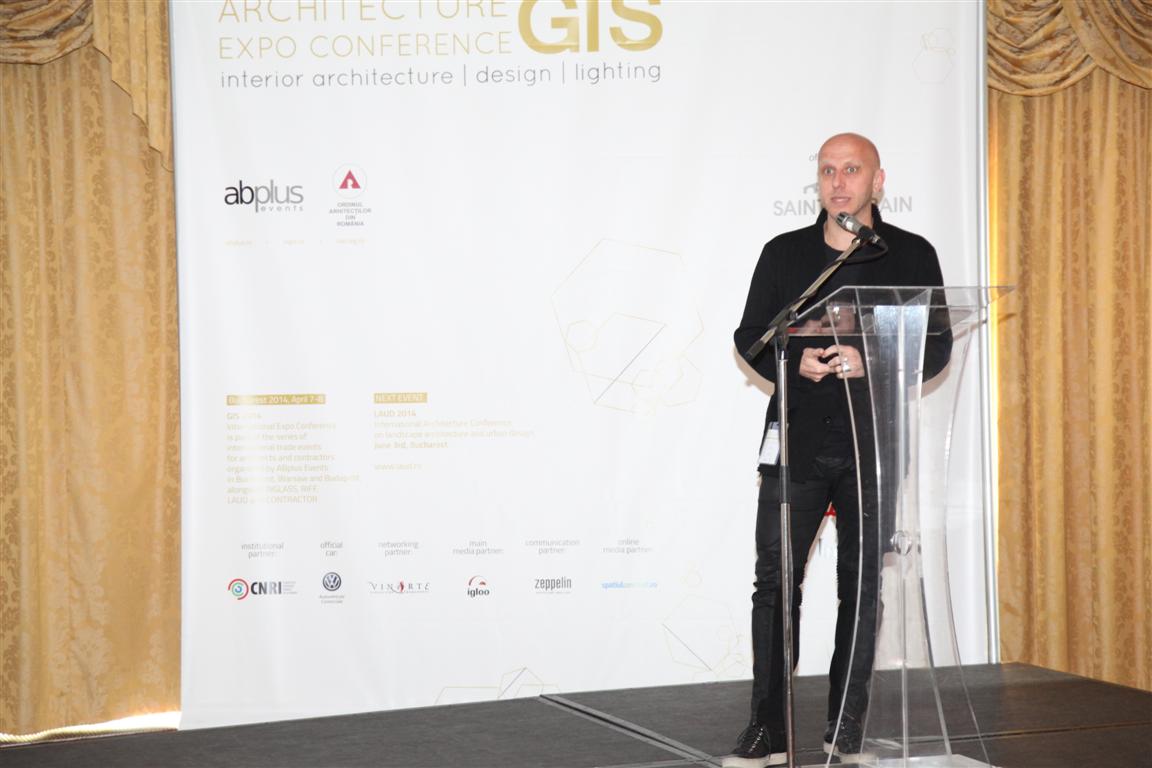 GIS – the most important interior architecture forum in Eastern Europe, organized in Bucharest with the participation of architects from 15 countries and of the European Council of Interior Architects

GIS Bucharest 2016 brings up for debate on the 22nd and 23rd of March the role of architecture and interior design in improving the quality of life and the way in which this can influence social and cultural environments and also learning and working environments. The conference is organized at the Radisson Blu Hotel in Bucharest and is chaired by arch. Șerban Țigănaș, the President of the Romanian Order of Architects.

GIS brings for the first time in Romania, as Special Guest, in the opening of the event, one of the most well-known Scandinavian architects, arch. Rainer Mahlamäki, and arch. Jan Geysen, Vice President of ECIA – The European Council of Interior Architects, from Bussels. The Chamber of Architects in Bulgaria (CAB) is represented at GIS by arch. Nicholas Galabov, CAB Vice President, former coordonator of ACE – Architects’ Council of Europe- thematic area “Architecture and the quality of life” awarded in Bulgaria and in The USA for its outstanding professional contribution.

GIS gathers in Bucharest architects and interior designers from Finland, Thailand, France, The United Kingdom, Italy, Spain, Slovenia, The Netherlands, Bulgaria, Portugal, Belgium, The Czech Republic, Greece, Hungary, Israel, Poland and Romania, winners of the most recent editions of international competitions, together with 250 architects from all the OAR branches in the country who will participate at the conference, selected on the basis of their work portfolio from the past three years.

Important reference points of the forum:

“Lighting Design” Masterclass, on the 23rd of March
Colin Ball, Lighting Director at the BDA London office, winner of the 2015 World Interior Awards – Best Lighting, collaborator in projects signed by star architects such as Zaha Hadid and Daniel Libeskind, will hold a master class with the subject “Lighting an idea”.

The International GIS Conference, dedicated to architecture and interior design is organized by the cultural association PROEvent, ABplus Events together with the Romanian Order of Architects, in partnership with “Ion Mincu” University of Architecture and Urbanism, Italian Cultural Institute, The French Institute in Bucharest, The Embassy of Slovenia and The Embassy of Finland.

Short description of the Special Guest at GIS edition 2016:

Arch. Rainer Mahlamäki has won in 2014 the first ever architecture prize awarded by the Finnish Association of Architects (SAFA). The architect’s portfolio is comprised of 37 international and national awards and other 57 awards. In addition, he is the author of most grandiose museum in Europe, technological-wise, the Polin Museum, dedicated to the Jewish Community in Poland. Having a vast experience in the field of cultural and educational projects, with countless museum in his portfolio, the Finnish architect is a jury member in the international competition launched for the new MNIR – The National History Museum of Romania.

Information regarding the access at the International GIS Conference 2016 edition:

Date: 22-23 March 2016
Location: Radisson Blu Hotel, Atlas Ballroom
Access: solely based on invitations. The registration of the participation can be made online on the website: bucharest.iegis.eu

GIS Expo Conference, realized by professional event organizer ABplus Events, is part of an European project organized in Romania, Poland and Hungary, together with the the thematic LAUD expo conferences (landscape architecture and infrastructure), INGLASS (glass architecture and glass engineering) and RIFF (roofs and facades).