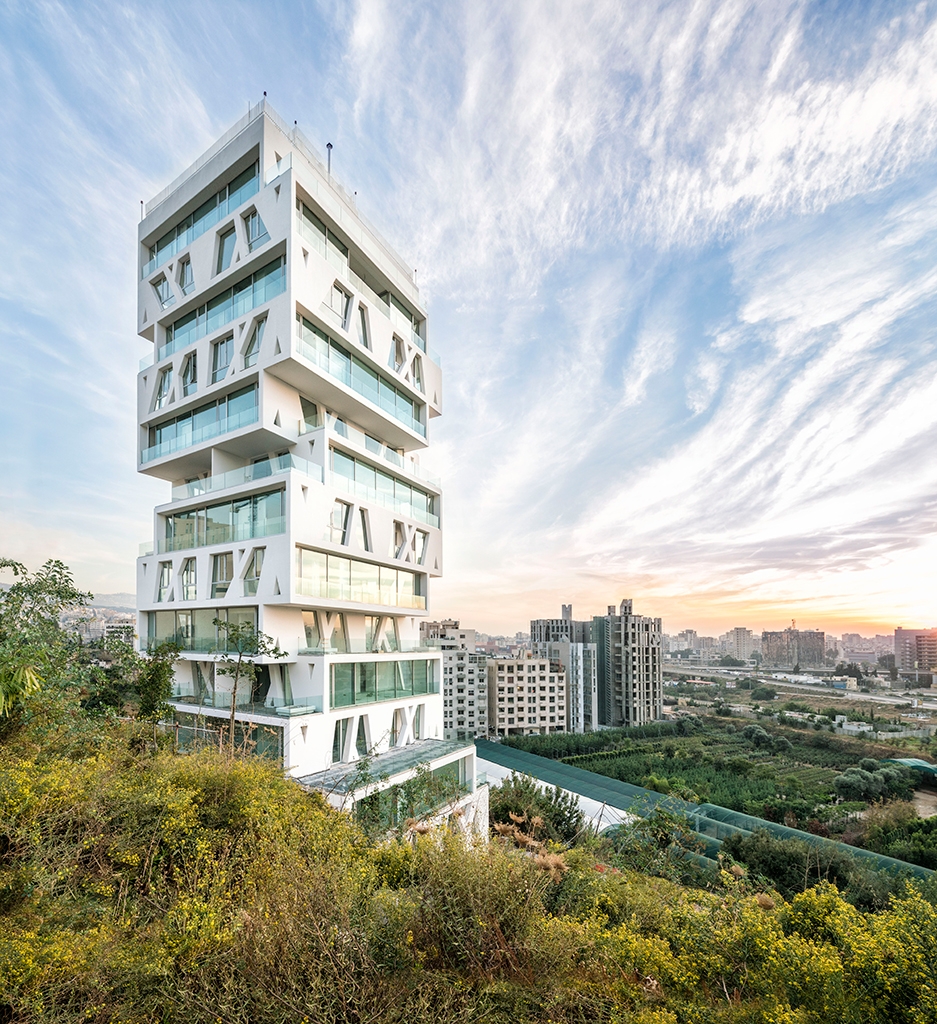 Architect Elena Staskute from Orange Architects, The Netherlands, will talk at  RIFF Bucharest 2016 (October 31 – November 1) about the architectural concepts behind the distinctive residential tower The Cube located in Beirut, Lebanon.

The Cube is an instant classic for Beirut, expressive, iconic and innovative. With its sculptural appearance of stacked boxes, The Cube is presenting a whole new level to the concept of high rise and the architecture of towers. The rotation and displacement of the volumes on each level offers residents magnificent outdoor areas on the roof of the apartment below, as well as panoramic windows up to 12 meters wide. Each level consists of one or two apartments. The single apartments have the fabulous opportunity to enjoy Beirut from a 360-degree panorama.

The design concept is simple but extraordinarily effective: ‘MAXIMIZE’; making optimal use of the client’s wishes, the site’s potential, the local building code and creating fantastic views on Beirut and the Mediterranean for the residents.

Orange Architects was established in 2010 as a multidisciplinary design firm, working in the fields of architecture, interior design and urban planning. The goal is to guide clients on a successful path towards inspiring, powerful and rich environments in every design-scale, from urban (re)development to product design; from collective housing to luxurious villa; from office planning to private interior.

Orange Architects has been working on ambitious projects in The Netherlands, Russia and the Middle East, particularly in Lebanon and Saudi Arabia. The designs draw great inspiration from both local culture and cutting-edge design techniques. The projects display Orange’s prime merit: the ability to embrace local traditions – and fuse them with new, innovative ideas and forms – creating synergy between present and future, between what is happening today and what will be tomorrow. Orange Architects develops appealing, conceptually sophisticated responses to complex spatial challenges.

The distinctive residential tower The Cube is located on a prominently visible location on the eastern part of Beirut, Lebanon. The Cube is erected in the vital Metropolitan Hotel district in Horch Tabet. The parcel, measuring around 30 by 40 meters, with a height difference of approximately 20 meters, slopes down from the North East to the South West. The entrance to the parcel is located on the lower side, alongside an existing unpaved road.

The design with the 14 stacked and rotated floor plans on top of a lobby, generates 21 attractive apartments in total, ranging in size from 117 to 234 m², with fluid spaces, large balconies and wall to wall window frames.

The white coated perforated girder walls of concrete strongly determine the appearance of both the exterior and the interior of the building. The parking for 42 cars is located underground in 3 layers and partly set into the adjacent hill. On the ground floor the recessed space for the lobby is covered by a spectacular cantilevering volume, creating a nicely covered place and marking the generous entrance of the Cube.

On the 22nd of June 2016 The Cube was awarded by The Council on Tall Buildings and Urban Habitat (CTBUH) with the CTBUH 2016 Tall Building Award for Middle East & Africa region.