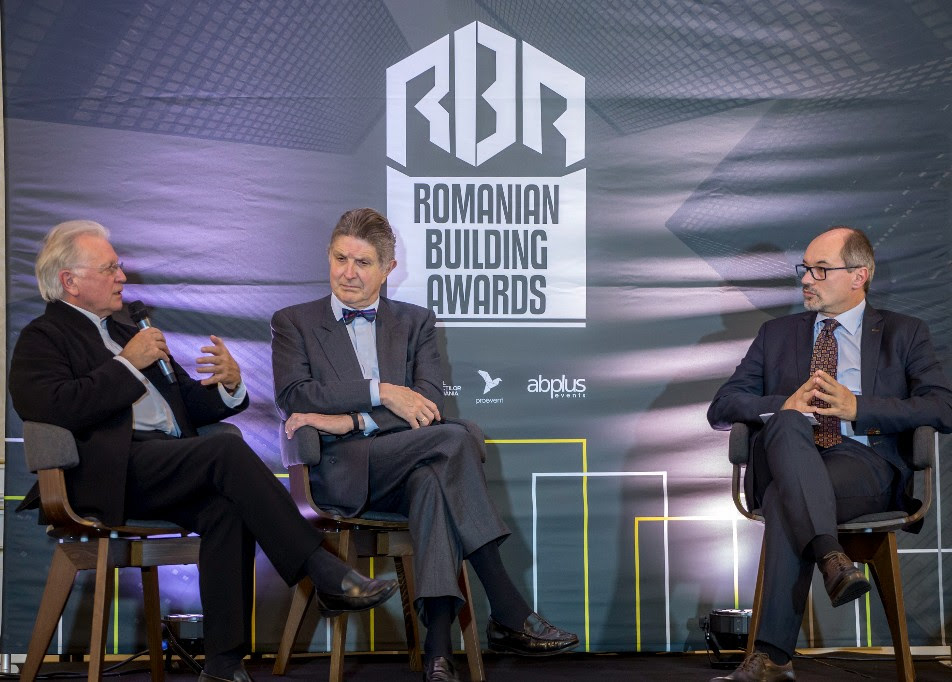 Which are the directions young architects should invest the most?

Editorial project: “Designing the Profile of the Future Architect”
under the coordination of the President of Romanian Chamber of Architects, Arch. Serban Ţigănaş.

Proevent Association launched at SHARE conference in Bucharest on November 6-7, 2017, the editorial project “Designing the Profile of the Future Architect “, which will be developed under the direct coordination of President of Romanian Chamber of Architects, Arch. Serban Ţigănaş. The proposed theme will be addressed over the course of a year through personal contributions, interviews and discussions sampled from the 10 locations where ABplus Events organizes conferences, reflecting afterwards in a publication which will be released next year at SHARE Bucharest, 2018. SHARE events facilitate, year by year, discussions and international meetings where experiences, ideas and excellence are shared – this initiative picturing, therefore, a legitimate endeavour to capitalize on these opportunities.
Francoise Pamfil remarks that a debate on the profile of the future architect is an important project for the profession, it is a project for schools, a project for architectural educators, a project for ourselves as it is a matter of common truth that we are living in a world of fantastic changes. What remains constant over time and what is variable today in the architect’s profile? – is the question being put to the debate?
Through a dedicated manifesto, Serban Tiganaş points out that “The world has become too small. Everything started to change rapidly. Speed is the new state of things. Nature is changing, the climate is changing, human settlements are changing too. Mobility explodes, technology runs, demography worries, information booms, energy vanishes and security against risk is the new value. Beside this, flexibility, resilience, and responsibility are targeted.(…) Architecture should become a fundamental part of everyone’s education. Architects should be formed to adapt and innovate, not only to solve and give an image.”
The present radiography is a synthesis of contributions from SHARE Bucharest, and the architects who contributed with a point of view are: Ian Ritchie, Paolo Brescia, Ken Mackay, Miha Desman, Dorin Beu, Dorin Stephen Adam, Marius Miclaus, Vlad Gaivoronschi, Renato Rizzi, Adrian Spirescu, Mihai Driscu, Radomir Serafimov, Adrian Cancer Zeana, Sergiu Petrea, Martin Hristov and Pako Radovanovici.

Which are the directions young architects should invest the most?
This question, with the hidden potential of retrieving the personal creeds of those interviewed, was addressed to the participants at the event, receiving diverse, substantial and unexpected answers.
” What kind of architect for such a future? wonders Serban Ţigănaş.
„From specialized to culturally driven.
From knowledge and skills to experience and character.
From speculating the rules to an argument for innovation.
From client driven to moderator for common interest.
From visual artist to anthropologist.
From business success to social reward.
From star to a constellation.”
“The appropriateness of architectural ambition” (Miha Desman) and the “star architect syndrome “ are highlighted by Ian Ritchie, who draws attention to the attractiveness that this model has on young people, insisting rather for creative, moral and social responsibility. He argues that “the issue of ethics in the field must also be addressed appropriately (…) even in the sense of learning the difference between personal values – and those for whom the project is designed.” Marius Miclăuş speaks also in favour of the idea:” I very much believe in a revirement of professional ethics and I think this is necessary … ethics in the sense of being vertical in society. “
Ian Ritchie strongly advocates that young people need to realize that architecture is a collaborative profession: “Students must be allowed time and opportunity to acquire a real and broad knowledge of the other disciplines involved in architecture – from art to neuroscience and engineering(…)because an engagement with philosophy, poetry or any other kind of non-architectural endeavour can bring a sense of unity to thought and action within the architectural realm”. Vlad Gaivoronschi believes that “as an architect, not necessarily everything begins to sing, but when their opportunities occur, they must not be missed”. For this, the first condition is to remain generals, is his opinion. “We have to remain true Hermes, to travel throughout the whole diapason “, and then learn to collaborate, cooperate … but not only by digital means.
“The most successful architects of the moment are charismatic people, we could say,” is Adrian Spirescu opinion. “They are people who not only know their profession very well but are also public people, they know how to talk, they know how to behave, they know how to interact with society “, claiming that he always learn his students, to talk about architecture, write about architecture, to consider deeply the problems of people, of the society, to open their ears to everything that happens around because, besides a good project management, a good personal management is also required. You should learn the communication skills on your own Pako Radovanovici assumes, because no one can coordinate you how to learn from your personal life experiences, from the mistakes you make, how to sell yourself, how to negotiate with the client. “The hardest thing is to get a first big project, one where you need to know how to sell yourself very well,” says the architect.
”Getting out of the state of comfort through originality”, through the “manufacturing of every detail” (Adrian Cancer Zeana) or innovating, researching, being flexible, and being consistent throughout the career (Sergiu Petrea) are other qualities added to the open list. „Do not ever lose your enthusiasm”, apprise Mihai Drişcu. “I have earned many beneficiaries, whom I have enthralled with my architectural enthusiasm.”
Whereas we are talking about SHARE, a recurring theme was that of generosity, Ian Ritchie being convinced that architects need to be generous through the nature of things and aware of their social mission, a position assumed also by Serban Ţigănaş, for whom architecture should rather be inclusive than exclusive, elitist. Renato Rizzi speaks that instead of getting closer to what we are creating, sometimes we should distance ourselves
regardfully, to give architecture the possibility to exist, to make room for it, to become witnesses.

“It may sometimes be too much to build, and then I think it’s good to take a step back by understanding the implications of your gestures, admitting to making a little reverence for a situation” Dorin Stefan Adam claims as well. “I think it is the time of generosity in architecture,” he concludes: “In a seemingly encapsulated world, the measure of this share of various, willingness sharing (our lives – on social platforms)- this share is not an affiliation with someone, it is a responsibility” On the same firmament, Mihai Drişcu speaks of the “worship of God” … in the sense of recovering the sacredness inherent in the architectural act, lost before the emergence of modernism, but especially in the sense that there must be a part of sacrifice and sacredness in every gesture of architecture.

The Radiography of “Today”
Paolo Brescia denounces the “Information Age”, and the notion of „risk ” that will define the industry in the next 10 years. Ken Mackay offers another prognosis considering that in “10 years we probably will not call ourselves an architecture practice anymore, it will something different entirely”. A number of voices along with Adrian Spirescu expressed the concern that the profession tends to lose its importance and its gravity, precisely through this process of deterritorialization of its limits or conceding from its territory to other areas. This process can not necessarily be countermanded by additional isolation but by the active involvement of architects in the life of the city from the first levels of interaction with the client to the political life.
For Romania, Vlad Gaivoronschi identifies that “the stringent problem is the absence of a desire for quality architecture exactly from those who would directly benefit from it … and I refer here also to the political environment. Quality architecture is the one that must resist – in both physical and moral time. “
The discussion regarding the financial implications that any project depends on has been raised for several times, on this regard Marius Miclăuş emphasizing the aspect of the time allocated correctly to the process of documentation and project design … quietness, respite “in the sense that we can never learn the client that things should be done carefully and that it takes time, as long as we do not give us time …”

Trends and a look to the future
“I think that the trends of the moment are not trends in architecture,” says Pako Radovanovici. Adrian Cancer Zeana draws attention to the fact that in the creative crafts there are two components: the commercial and the perennial one, the sustainable approach which will take into account the trend but has a much longer and deep look: and in the negotiation of these territories is architecture finding its grace.
Young architects are encouraged to explore interdisciplinary territories, to lend credit to the multidisciplinary character of the field, to reconsider the “carbon-free concepts” (Dorin Beu), sustainable thinking, new materials, to reflect on globalization , on “World-City and City-World” (Paolo Brescia) and to the “speed as the new state of things” (Şerban Ţigănaş). Adelphi publishing house director asserted that the real power we can have today is to be able to forget all the unnecessary communication that we have every day. A well-positioned idea, when the proliferation and abundance of the image – the “ecstasy of communication” (Neil Leach) only describes a world in which there is more and more information, but less meaning.
The thinking must be different – regardless of the age of the architect, “because this is not a matter of young, experimental or inexperienced – but everything is young because everything is new (Dorin Stefan Adam). The attainment of genius entails a special ability of anticipation; “the vision, sometimes with many decades ago, of what architecture will achieve in a certain moment of the future.” (Mihai Drişcu) … because “architects can never escape the mere fact that what we are designing now is for tomorrow and for the next generations “(Ian Ritchie).
In concluding a conquering interview, Renato Rizzi concludes: “When you come to know the past, you can understand and interpret the present and the future and become the sum of all these experiences. This is architecture – and if you are not in love with it … “