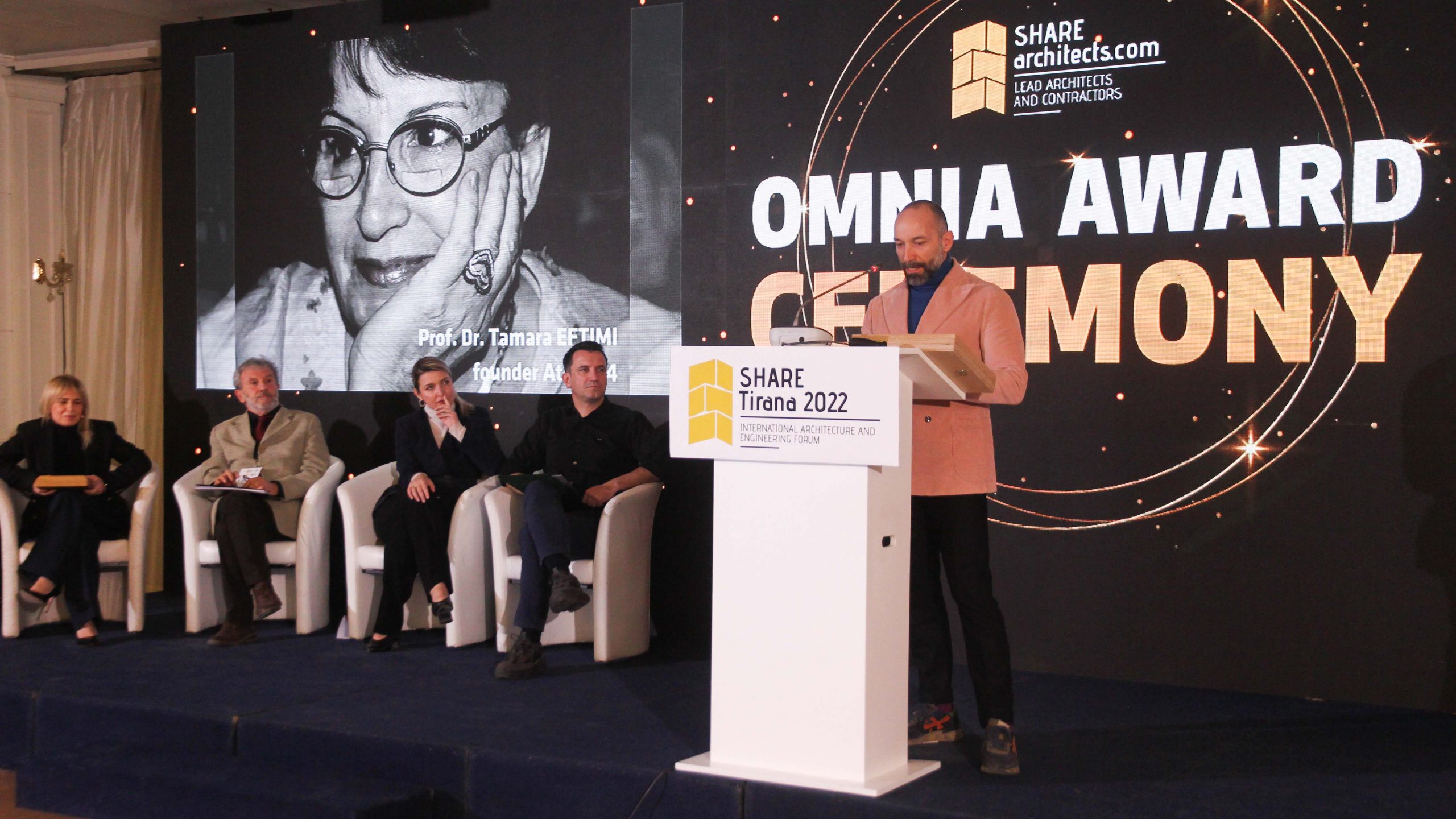 We feel privileged to have had the honor to celebrate Prof. Dr. Tamara EFTIMI during the IVth Edition of SHARE Tirana 2022, on the 3rd of March. The SHARE OPERA OMNIA award was given in recognition of her valuable contribution in the field of architecture and urban planning, scientific and technological research, and as one of the most prominent personalities for more than four decades, in the academic field, an active influential and contributor to many generations of young architects and consolidated professionals.

The award was received by arch. Olsi Eftimi on behalf of the team of ATELIER 4. It was a beautiful ceremonial moment in the company of Florin Mindirigiu, Founder of SHARE Architects, Matilda Pando, President of Albanian Architects Association, Masar Dushi, President of Architects Association of Kosovo, Armand Vokshi, Dean of the Faculty of Architecture and Urbanism, at the Polytechnic University of Tirana Elva Margariti, Minister of Culture from Albania Erion Veliaj, Mayor of Tirana, and Frida Pashako, Director in Department of Territorial Development Control, Municipality of Tirana

Starting from 1974, until 1986, she coordinated her academic engagement with that of the Designer Architect at the “Institute of Industrial Works” and “Institute of Study and Design of Architecture and Urbanism No. 1” Tirana. During this time she attended post-university multidisciplinary specializations, where it is worth mentioning in 1983, the specialization in Paris, on: “Design of Television Studios and Cultural Centers”, considered as the only Albanian architect and expert with full full scientific and technological recognition on acoustic studies.

In search of a modern alternative system, to what remained traditional in the environment and the limited acoustic knowledge in particular, Tamara Eftimi became the inventor, co-author and scientific consultant of some of the most important public projects of the time such as: The Sound Studios Project in the Film Studio “Shqipëria e Re”, the acoustic treatment project of the Film Hall in the Enterprise “Libër-Film”, the technological concept note of the ​​perspective expansion of the Albanian Radio-Television, the acoustic project of the Symphony Orchestra Hall and the Choir and Folk Ensemble Halls at the Opera and Ballet Theater, the acoustic treatment projects at the Opera and Ballet Theater, etc.

With decision: No. 202, dated 25.01.1989, she received the title “Doctor”, and a decade later, with decision  No.6, dated 18.02.1999, she is awarded the title “Professor”, among the few architects in the history of the transition years, who might have been able to accumulate a structured and excellent academic and professional experience.

A researcher, with the combination of unusual values and qualities, with the vision of an architect contributing in the urban and community environment, in 1993, entrusted with the position of: Member of the European Housing Research Network, (ENHR European Network for Housing Research), and meanwhile she further attended in 1996 the specialization on “Problems of Residential Planning and Design of Collective Housing”, in Montpellier, France.

In 1997,  entrusted with the position of Rector of the Polytechnic University of Tirana and at the same time lecturer in the Department of Urbanism and Architecture, she remained in the memory of generations who were fortunate to be close, under a lively communication, a critical and constructive vision, with an unsparing and brilliant presence.

You can not determine with a simple analysis whether Prof. Dr. Tamara EFTIMI, was a most valuable architect in the academic spectrum, or as a design architect, scientific researcher, culturologist, and why for the environment of architects remains as one of the most important public academic portraits with a current echo.

In 2002 Prof. Dr. Tamara EFTIMI was honored with the award, “RIDER OF ACADEMIC PALM TREES” Awarded by the Ministry of Culture, France.

In the years 2003 – 2013, from an architect of written word of scientific thought and not only, Prof. Dr. Tamara EFTIMI returned full time to architecture – a time she had saved for many things and the fanaticism that time rewards and always turns back what belongs to it.

Co-founder and Technical Director of the design studio Atelier4, architect Tamara EFTIMI, has left behind a wealth of important architectural works, studies and public and private projects, which despite the difficulties of a continuous transition keep the trace of an admirable contemporary, contextual, alternative and often monumental designer, aware that architecture is not a matter of shelter.