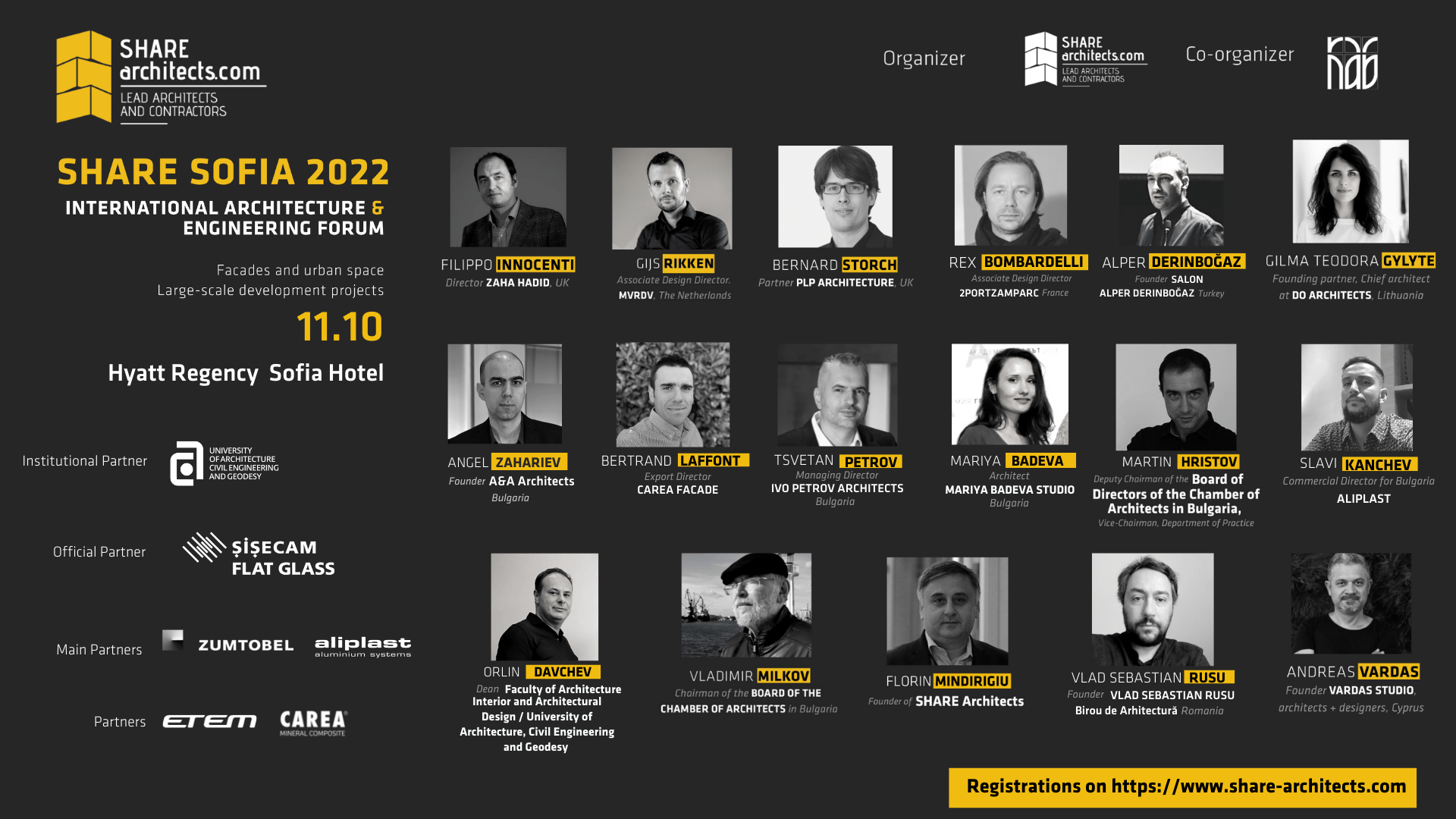 Announcing our great lineup of featured speakers for the SHARE Sofia 2022 Forum!

The SHARE Sofia 2022 Forum on the 11th of October will feature a great line-up of speakers from Bulgaria, the UK, the Netherlands, France, Lithuania, Turkey and Cyprus.The event will take place at the Hyatt Regency Sofia Hotel.

The International Architecture and Engineering Forum – SHARE celebrates its sixth edition in Sofia and focuses on the design and performance of facades and their impact on public spaces.

The SHARE Sofia 2022 Forum will take place on the 11th of October at Hyatt Regency Sofia Hotel and is organised by SHARE Architects, the largest network dedicated to architecture and construction professionals in Central and South Eastern Europe, together with The Chamber of Architects in Bulgaria (CAB).

The goal of SHARE Sofia 2022 is to focus on design and performance for the next generation of facades and their impact on improving public space, as well as to showcase major developments in Bulgaria and internationally.

The SHARE Sofia Forum will welcome architects with outstanding projects and international leaders in innovation and building technologies.

Through architectural presentations and debates, SHARE Sofia Forum offers the latest information and knowledge as well as the opportunity for professional networking at the highest level. The conference lectures will be given in Bulgarian and English. 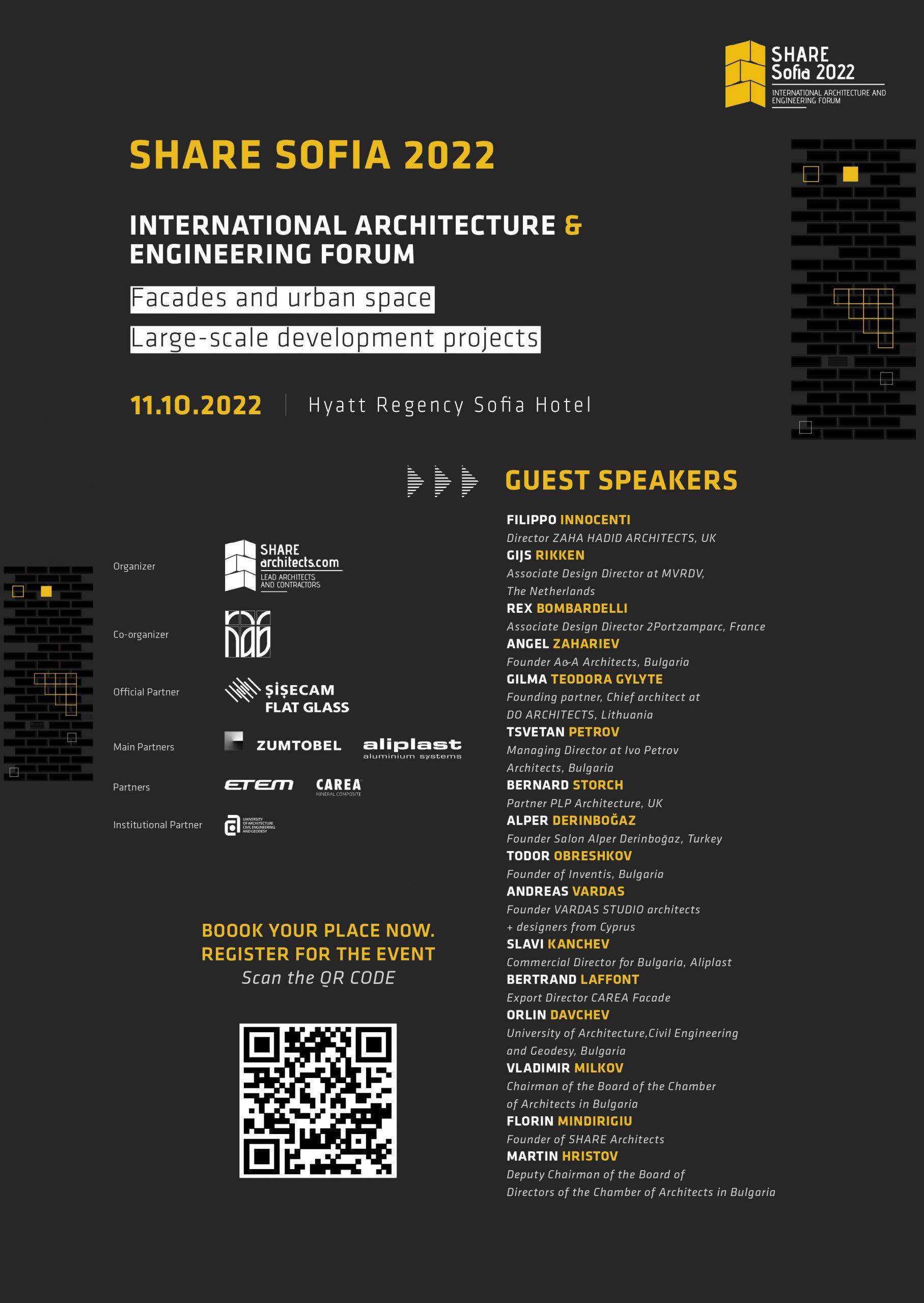 Filippo Innocenti has worked with Zaha Hadid for 20 years, since 2002. He has specialized in the design of transportation buildings.Thus opening ZHA’s successful entry into the infrastructural sector with the design of the first train stations.  The multi awarded Naples-Afragola High-Speed Train Station, the Riyadh KAFD Metro Station, the Navi Mumbai International Airport, the Port of Tallin Masterplan in Estonia are just a few masterpieces, achievements of Filippo.

Gijs Rikken is an architect and Associate Design Director at MVRDV since 2007. At MVRDV, Gijs is responsible for the design and execution of a wide variety of projects, ranging from large-scale, complex buildings to detailed innovative material research.

Rex Bombardelli graduated in 2004 from the University of Florence (Italy), the year he joined 2Portzamparc. He was made design director in 2017 and associate in 2019. Today, his areas of expertise include cultural institutions and music facilities: operas house, concert hall and theather. He is responsible for several site monitoring in France and abroad, such as the Shanghai Music Conservatory or the National Conference Center in Beijing, whose path he has followed since the conception.

In 2005, Angel Zahariev founded the architectural bureau A&A Architects with Assen Milev. As a manager and leader of the design team, he has been rewarded with multiple professional awards: Architect of the Year, Building of the Year, Archinova, Student of the Year, among others.A&A Architects’ building, NV Tower, has won 3rd place in the world’s most renowned skyscraper architecture competition, the Emporis Skyscraper Award 2021.

Gilma leads the projects which create positive impact and inspires others around. She created the concept and the prototype design of Naugarduko street-park in Vilnius, which led to the creation of the official City of Vilnius Street Design Manual – the first in the Baltics.

Tsvetan Petrov is the General Manager of the Bulgarian studio “Ivo Petrov-Architects”. He is a graduate from from the Faculty of Architecture of UACEG in Sofia, Bulgaria and has specialized in L’ecole National Superieured’architecture de Bretagne in Rennes, France. For the last 15 years, he has developed the studio and managed to turn IPA into one of the most successful companies for architecture, urbanism, and interior design in Bulgaria.

Bernard has exceptional experience on a wide range of commercial, residential, institutional and hospitality projects in the UK, Europe and the Middle East. Recently completed work includes the award-winning Sky Central, which provides large and flexible workspaces for 3,500 employees of Sky Television along with multiple food, sports and leisure amenities.

AlperDerinboğaz has been recognized as an emerging and influential architect in Turkey and in Europe. Founder of architecture practice Salon, selected as one of Archdaily’s Best Young Practices of 2020, his work investigates the possibilities of the physical environment through the relationship between space and time. His designs vary from large scale cultural institutions to art installations, united by the desire to uncover and question the essential elements of site and concept.

Andreas Vardas is the founder of VARDAS STUDIO architects + designers. His practice in Paphos has grown since 1997, designing and procuring a number of widely published projects that bear his unique aesthetic. He received his architectural education in the Bartlett School of Architecture, and practiced in a London office before returning to Cyprus and setting up his own practice.

Vlad Sebastian Rusu is an architect and university lecturer at the Faculty of Architecture and Urbanism in Cluj, Romania. Since 2008, he has been active in his architecture office, having numerous projects and researches related to urban and architectural heritage, awarded with prizes in the country and abroad. Currently, his architecture office’s pursuits are focused on promoting responsible and innovative architecture that highlights the importance of recognizing and reclaiming the built heritage that exists in our cities.

The tickets for the SHARE Sofia 2022 Forum can be purchased at share-architects.com.