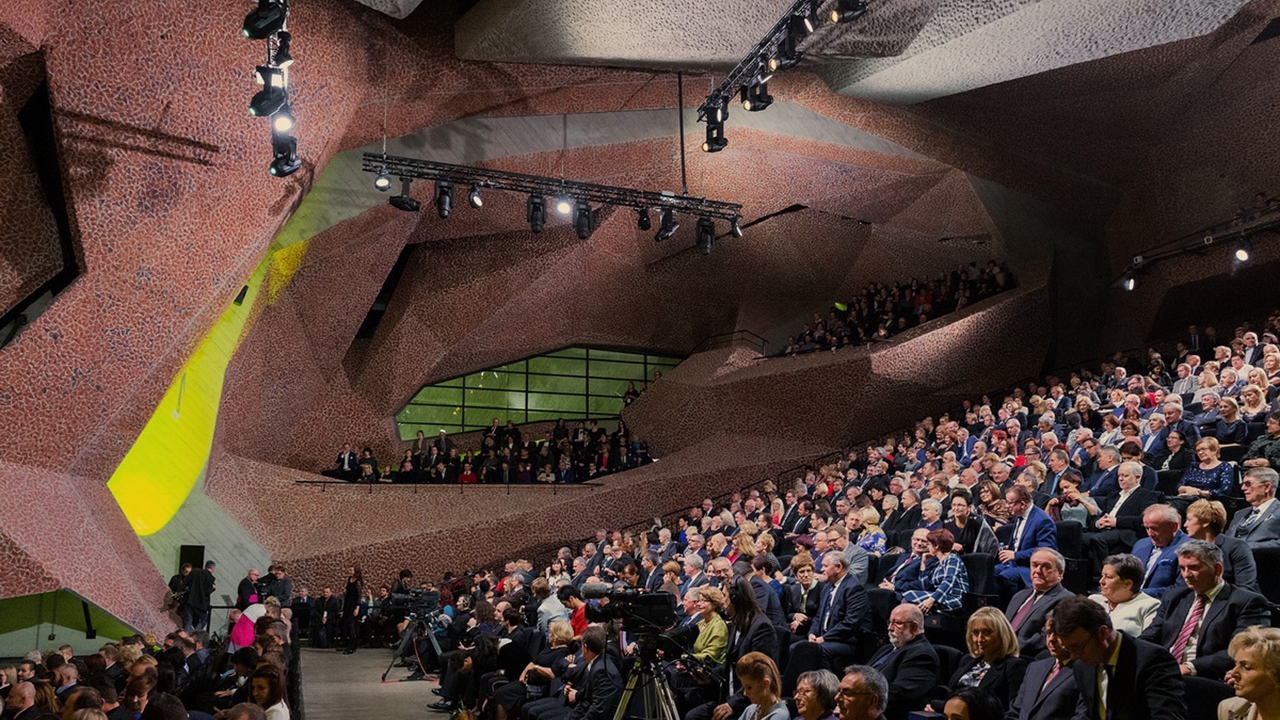 Reason and Emotion – the special case of an Auditorium in Torun is the title of the presentation of Fernando Menis, head architect at Menis Arquitectos, at RIFF Warsaw 2016.

The new Cultural Center, CKK “JORDANKI”, is located in an old park in the green ring that surrounds the city of Toruń, a World Heritage site noted for its Gothic red brick.

In order to achieve the integration of the building into the landscape of the city, half the plot was allocated to the creation of a green park, achieving the perception of its intervention as a landscape rather than a building. With the purpose of respecting the restrictive historical regulations, 60% of the building is constructed below ground to be in harmony with the city. 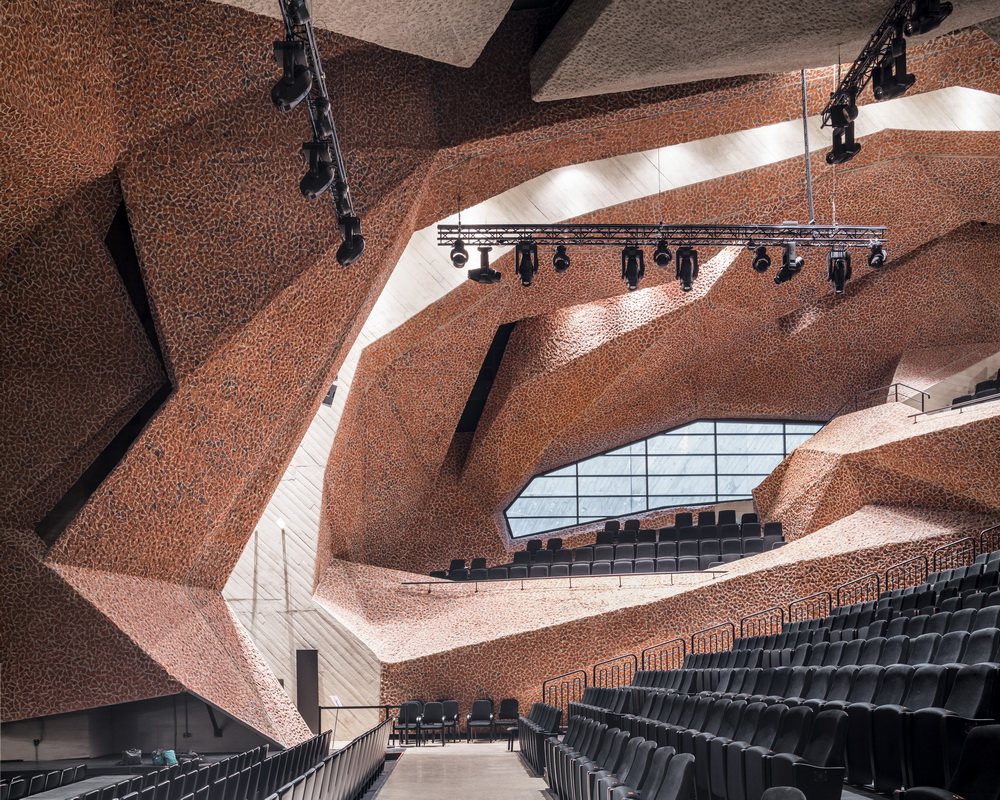 The auditorium solves the fusion between Torun’s new and heritage parts blending historical (red brick) and contemporary materials (light gray concrete), transforming the use of both – a research contribution – so the acoustics of the building is solved with the resulting texture (an innovation called “Picado”, already approved). Its exterior shows the internal brick lining in its holes, as if ripped, thus the façade reinterprets the traditional craftsmanship of the brick. The interplay of colours, red and white, emphasizes that it is possible to respect this heritage and bring technology and modernity to the new urban development.

In its interior, the innovation lies on the variable acoustic system by volume change, which allows a flexibly housing of many different events. Big movable concrete pieces can transform space volume from 1.85sec for symphonic music to 1.20sec for theater.

Its users consider it has become a center of attraction, improving Torun’s economy, based on tourism and culture.

Having completed his studies of Architecture in Barcelona, between 1981 – 2004, he creates projects at the firm he founded with his two partners. He later started an independent path through two architectural studios — Menis Arquitectos and Fernando Menis — with headquarters in Tenerife and Valencia.

Menis serves as principal architect and/or co-author of a large number of projects. Some of the at ready-built projects are: CKK “Jordanki” in Torun, Poland (2015), Burchen Public Square in Burchen, Switzerland (2015), Insular Athletics Stadium (2007), Magma Art & Congress (2005), Swim ming pool on Spree River in Berlin (2004) and Presidency of the Canary Islands Government Building (1999). Some of the on-going projects are: Urban / Coastal Seaside Planning in Boa Vista — Santa Monica and Chave (Cabo Verde), Three Villas in Lijiang, China, Auditorium in Pajara, Agora Garden and Aurum House in Taiwan, the Holy Redeemed Church in Tenerife, and the Burchen Mystik Hotel in Burchen, Switzerland.

WAF 2012 Awarded: First prize in the “New & Old” category and “Special Director‘s Award” with the “Plaza of Spain in Adeje” project, 2012 Ambuja Cement Foundation Award in Architecturural Innovation, “Holy Redeemed Church”, WAF (World Architecture Festival) awarded: 2010 Best Future Cultural Project Award. Winner of the Spanish National Architecture and Design Award (PAD 2000). Recognised on several occasions as winner of the Canary Islands Regional Architecture Award. FAD Awards (Arts And Design Promotion) and Spanish Architecture Exhibition Awards finalist. Menis has been invited to participate in the Venice Biennale and other exhibitions held at the MoMA NY (2006), Aedes Berlin (2006), GA Tokyo (2009), WAF (World Architecture Festival) awarded: 2012 New and Old category and Director‘s Special Prize with “Sacred Museum and Plaza of Spain” in Adeje, and so on. Recently recognised with the addition of the Holy Redeemer Church in the permanent collection of the MoMA, NY.