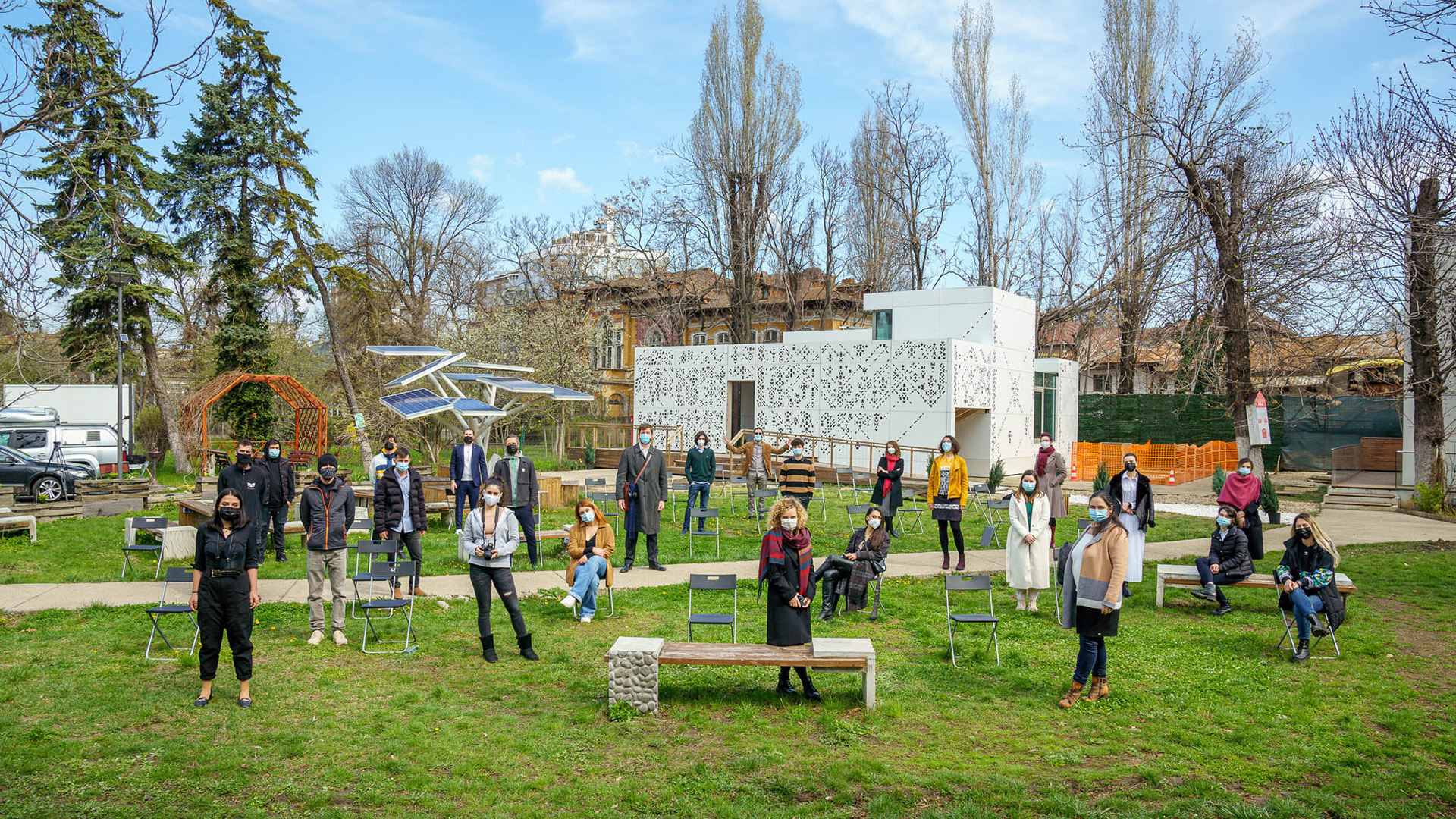 The organizing dream team composed of EFdeN and the ENERGY ENDEAVOUR FOUNDATION (EEF) is joining forces to bring the Solar Decathlon Europe 2023 (SDE23) to Bucharest!

The press conference announcing Bucharest’s designation as the Host City took place on 8th April 2021, at 11:30 GMT + 2, at EFdeN HQ within Bucharest’s Faculty of Building Services Engineering, on Bd. Pache Protopopescu, no.66, Sector 2, Bucharest. The event was also live streamed and it’s recording can be found on the Solar Decathlon Europe 2023 Facebook page.

Before designation as Host City Organisers, Romanian Decathlete Teams participated in four of the five Solar Decathlon Europe (SDE) editions, starting with the 2012 edition in Madrid. Ten years later, with the continued support of technical universities in Bucharest, as well as impressive support from the private sector, the Romanian SDE23 Organisers have the honour and the responsibility to host  this sixth edition of the Solar Decathlon Europe in Bucharest, in September, 2023.

The SDE23 in Bucharest, as with every SDE edition, is looking forward to receiving the ambitious projects of approximately 20 student Teams, all eager to change the European built landscape with one that is more adapted to current challenges. From entry to presentation, the Decathlete Teams spend two years designing, building and communicating their prototype, preparing their performance during the two weeks of public visits, jury contests and monitoring. The students organise their multidisciplinary Teams on their own, functioning as young professionals, able to thoroughly cover the launch of their full-scale prototype, from designing and building, to communicating and marketing, to then operating the prototype. The ten (decathlon) contests include architecture, the prototype’s integration in the built environment, engineering, innovation, sustainability, and last but not least the economic viability for the prototypes’ destination markets.

Initiated in 2002 by the United States Department of Energy, the Solar Decathlon Competition has challenged technical universities and student Teams around the world to design, build and operate efficient and innovative buildings using renewable energy sources. Since 2002, the Competition has grown and expanded worldwide, becoming the main international ‘design & build’ event in the field of sustainable construction, with chapters on five continents and in ten countries. Since 2017, the Energy Endeavour Foundation is the stewarding body for all Solar Decathlon Europe Competitions, providing continuity from one edition to the next. Based on the original U.S. model, Solar Decathlon Europe was born in 2010 and has evolved in a direction well adapted to the European built environment, encouraging pan-European professionalisation, while keeping the international spirit. The EEF ensures the Competition’s mandate through a structure for the transfer of knowledge, nurturing the values acquired over two decades.  These actions foster connections between academia and industry, policy-makers, professionals, students and the broader public toward resource optimisation and behavioral change.

“This time the national team made up of young researchers, students with vision and will, is as important as any national team that manages to bring such a competition to Romania” – Barna Tánczos – Minister of Environment, Waters and Forests

“We agreed from the outset to support Romania’s candidacy in 2023 for organizing the Solar Decathlon competition. Romania must be part of this revolution of sustainable constructions that also involves energy efficiency and prosumers. ” – Virgil Daniel Popescu, Minister of Energy

“We will have to learn this partnership step by step; to learn to fund such initiatives, to be grateful to those who put us in highly exposed, positive positions in the world, and we should be proud to have such initiatives. This is the ferment that can take us in the coming years, on the one hand to the first places in terms of the technologies of the future, on the other hand to strengthen the entrepreneurship that should be the foundation of an economy. “ – Ciprian Teleman – Minister of Research, Innovation and Digitization.

“The organization of the world competition, here in Romania, is an extraordinary success that comes as a result of a construction that started in 2010 and is due to all the students from all the Romanian teams that have achieved an extraordinary performance. They have learned to work together, to design and build, to relate to the market, to the sponsors and they have managed to build a huge capital of international trust. ” – Prof. univ. dr. eng. Radu Sorin VĂCĂREANU, rector of the Technical University of Constructions of Bucharest

“This project educated 2 very important things: teamwork and expressing individual performance. Every moment of these people’s activity is research, and the power of this project is given by practice, which demonstrates, proves the viability of research, innovation, imagination and results of years of study of each participant in this competition. ” – Prof. Dr. Arch. Georgică Mitrache, Vice-Rector of the Ion Mincu University of Architecture and Urban Planning

“We share the joy of the organizers to see that an international competition that brings energy sustainability to the forefront is hosted by Romania. We have been supporting EFdeN since 2015 as we have the same vision for the future, and participating in the Solar Decathlon is an opportunity to stimulate innovation and the competition of ideas on topics such as passive housing, the use of green energy sources, energy efficiency solutions and of the smart home integrated ones. ” – Cristian Buzan, Executive Vice President of ENGIE Romania

“We are absolutely delighted that Romania occupies its rightful place in the tradition of the Solar Decathlon Europe competition. So here we are, together, offering continuity and impetus to this approach of youth in energy education and responsibility for the use of resources. The organizers of SDE23 in Bucharest are the embodiment of the team spirit specific to this competition and demonstrate, through work and devotion, that we can be a spearhead in achieving a real and lasting change. ” – Louise Holloway, Energy Endeavor Foundation Director

Asociația Solar Decathlon București (EFdeN) is the engine behind Bucharest’s SDE legacy involvement. Having already participated in previous Solar Decathlon editions, in Europe and in the Middle East, this team has invested vibrant and relentless energy in the Solar Decathlon and its values. Over 900 volunteers have learned and built with this team over 10 years, inside the Competition and beyond, bringing home over 40 awards, the support of more than 400 private companies, and fifteen public institutions and authorities. Bucharest’s Technical Construction University and Ion Mincu University of Architecture and Urban Planning are among the founding members of this Association.

Based in the Netherlands, the Energy Endeavour Foundation is a non-profit business organisation, buttressed by its EEF Board of Directors. Endorsed by the U.S. Department of Energy, the Energy Endeavour Foundation is stewarding the second decade of the Solar Decathlon Europe. The past decade was characterized by growth and consolidation of the SDE vision, with increasing impact on communities and individuals. Recent winner of Eurosolar’s European Solar Prize, the EEF has consolidated the SDE while building new initiatives linking academia, industry, and research in the quest for resource optimisation. The EEF works with dedication toward the continued excellence of the Solar Decathlon in Europe. The EEF’s stewardship has resulted in two successful Calls for Cities to host the SDE, and two Calls for Teams; the SDE19 took place in Szentendre, Hungary, the first city in central Europe to host an SDE event. The upcoming SDE21 will take place in Wuppertal, Germany in 2022, as an exciting lead-up to Bucharest’s SDE23.

The Ministry of Environment is responsible for implementing the national policy in the fields of environmental protection, green economy, biodiversity, protected natural areas, climate change for all sectors and subsectors it manages; elaborates the strategy and specific regulations for development and harmonisation of these activities within general policy of the Government; ensures and coordinates the application of the Government’s strategy in its fields of competence, fulfilling the role of state authority, synthesis, coordination, regulation, monitoring, inspection and control in these fields.

The Ministry of Environment acts to protect the environment and natural resources, to guarantee the current and future generations a clean environment, in harmony with economic development and social progress.

ENGIE is a global group, active in the field of energy and reduced carbon footprint services. Together with its 170 000 employees, clients, partners and other stakeholders, ENGIE is committed to accelerating the transition towards a carbon neutral economy which employs environmentally friendly solutions. Ambitious, they combine economic performance and positive impact on people and the planet through their key activities – natural gas, renewable energy, services – to offer competitive solutions for their clients.