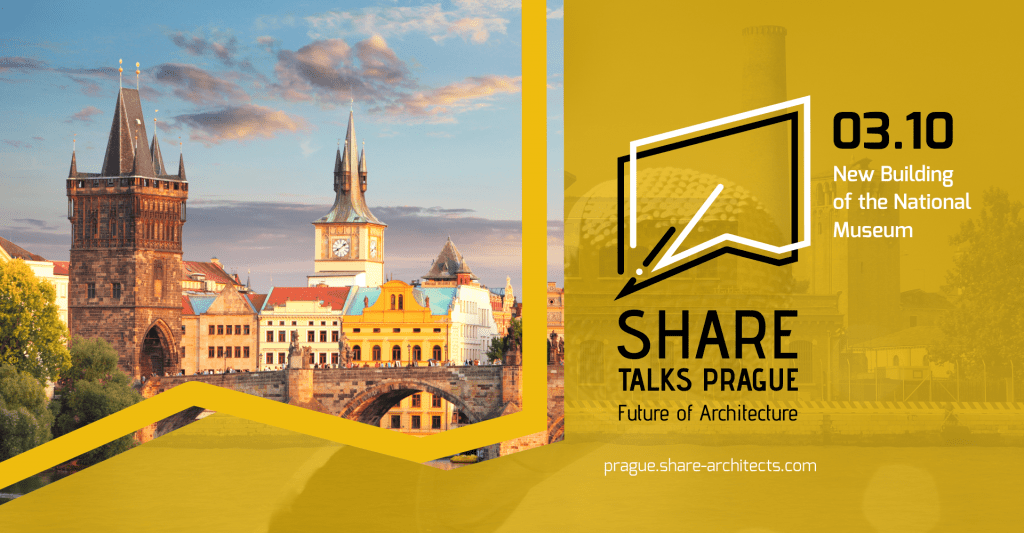 A visionary approach to the Future of Architecture!

SHARE TALKS PRAGUE 2019, with the theme “The future of Architecture”, will take place on the 3rd of October at New Building of the National Museum, Congress Hall. This first edition is a closeup of the way architecture is evolving, and it bring lectures from an international panel of speakers. The event is organized alongside The Society of Czech Architects.

Promising to become a landmark for cultural architectural events in the Czech Republic, SHARE TALKS PRAGUE 2019, organised alongside the Czech Society of Architects and part of SHARE Architects 2019 European program, gathers some of the most important contemporary architects as speakers. The event will feature lectures from international speakers followed by debates on the theme „The Future of Architecture”. SHARE Talks Prague will also host the launch of the book “Designing the profile of the future architect”.

Leading the discussion of this unique event and addressing a welcome speech in the Official Opening of SHARE Prague Talk, in his role as chairman of the event, is architect Oleg Haman, president of the Czech Society of Architects.

Giancarlo MAZZANTI, Founder El Equipo Mazzanti, will focus on “The Game as a mechanism of social interaction”, and he has shared some interesting thoughts regarding this theme:

“We believe that the value of architecture lies not only in itself but in what it produces, in its performative capacities rather than in its representational capacities, that is why we are interested in an architecture that is defined by what it does and not by its substance.

Just like games, architecture is a social phenomenon based on rules; when they are used, they are appropriate. Games and architecture redefine relationships, roles and situations in already established contexts, being able to generate knowledge and learning.”

The renown Colombian architect has relevant international projects such as Convention Center, Biblioteca España and the Southamerican Games Coliseums in Medellín, Colombia. Porvenir Kindergarten in Bogota and Timayui in Santa Marta. He has been teacher in several Colombian Universities. He has also taught at some of the most prestigious American Universities such as Princeton University in 2012 and Harvard Graduate School of Design in 2014.

Murat TABANLIOĞLU, Founding Partner at Tabanlıoğlu Architects, award winning practice is developing projects on four continents. With a list of multiple awarded projects, Murat Tabanlıoğlu lectures at universities and various international platforms, as well as managing his atelier program at Istanbul Bilgi University. In addition to his national and international contributions as a jury member, such as at AIA and WAF, Murat served on the Master Jury for the 2013 Cycle of the Aga Khan Award for Architecture. In 2014 he has been granted with the great honor of curating the first Pavilion of Turkey at the 14th International Architecture Exhibition at the Venice Biennale. In 2015, he has been the curator of “Port City Talks. Istanbul. Antwerp.” exhibition at MAS Antwerp, as a major event of Europalia 2015 Turkey.

Anouk LEGENDRE, Partner and co-founder of XTU architects, a French agency developing a truly innovative approach to the city and the habitat. Owners of 3 technological patents in 2011, XTU has in particular invented and developed with the consortium SymBIO2, the system of ‘biofaçades’ (active facades integrating microalgae cultures). In 2016, XTU is Laureate of the competition Reinventing Paris for the project In Vivo including the 1st building of housing to biofaçades. The projects run by XTU offer another way of seeing the world and the certainty that we must change lifestyles: Architecture must anticipate the future!

Drawing inspiration from the strategies and processes of life. Among its remarkable achievements is the Jeongok Prehistory Museum in South Korea (prize of the Korean Academy of Architecture), the French pavilion of the Milano 2015 World Fair (Best Architecture Pavilion), Cite du Vin in Bordeaux (2016).

Maurizio MEOSSI, Senior Associate at Zaha Hadid Architects. He has been working for the practice since 2002. In his presentation he will firstly introduce the current set out of the Office and then focus on the topic of the most recent Residential Projects, with an overview of the production of the last 10 years and more specific presentation of 3 case study projects in 3 different continents which he has personally directed.

Cinzia Ferrara, Founder at FERRARA PALLADINO LIGHTSCAPE. She trained and practiced as an architect before deciding to focus on the special relationship between light and architecture. Now she has a CLD (Certified Lighting Designer) certification.

Having a special relationship with her work, Cinzia Ferrara believes that in lightning the work is about creativity, sensitivity, innovation and technical competence. She also says “The problem is that people think of LIGHT as something that is given – they take it for granted. You can only understand the power of something when you don’t have it – light: it very much resembles freedom.”

She has been President of APIL (Association of Italian Lighting Designers) from 2008 to 2014. She just completed the projects of interior and exterior of the Duomo in Milan. She has also been involved in the interior projects of Malpensa International Airport, Linate Airport and the International Airport in Venice. She also designed the interior lighting of two small terminals: Linate Prime Terminal renewal and Rome Urbe Airport New Passenger Terminal. Recent works are “Punta della Dogana” Contemporary Art Museum in Venice with Tadao Ando, “Palazzo Grassi” Art Exhibition Center renovation with Tadao Ando, “Shoah memorial” with Morpurgo in Milan, Railway Stations renewal in Milan, Rome and Florence.

Among the awards she has received over the years are Winner “Architectural valorisation of an historical building in c.so Venezia, Milano” /with Quattroassociati, winner “International competition for the Park in new city fairground redevelopment area, so called Citylife” in Milan /with Gustafson Porter, !Melk, Ove Arup e One Works, winner “Valorisation of the waterfront of Lake Como” /with Cino Zucchi, “Exterior lighting of the Cassino Abbey” /with Cassino University, winner “International competition for the valorization of 25 monumental sites in Matera”, winner “Building in the waterfront of Trieste” /with Mario Bellini. The project has been shown at the Architectural Biennale in Venice.

Șerban Țigănaș, General Secretary of the International Union of Architects (UIA) and SHARE Society President is the curator of the book “Designing the profile of the future architect” and he will be present at SHARE Talks Prague on the 3rd of October to speak about the most important aspects the editorial projects is bringing to the architectural community.

“Designing the profile of the future architect” is the first editorial project initiated by SHARE architects and it is a book that highlights 100 international contributions, texts and interviews collected from guest speakers of the SHARE International Forum from the 10 countries where it is held each year.

The event is organized by PRO Event Cultural Association, dedicated to providing and developing forms of continuous education by specialized organisations through awareness campaigns and promotions of cultural themes, ideas, values, through actions to support dialog and culture exchange, AB Plus Events, a communication agency founded in 1997, working at the heart of design, architecture and property sectors in Central and eastern Europe, alongside the Society of Czech Architects, a cultural platform for Czech architects and for international architects working in the Czech Republic with goal of supporting local architects, in assisting members professionally and also in a broader sense promoting the architectural community across the country.

Registration for the event is now opened here – https://bit.ly/2PhxOeY, and the special Early Bird offer is available until the 20th of September. Young architects and students, under 30, will benefit from the Young Tickets offer that has been designed especially for them. More details can be found on the official website of the event prague.share-architects.com.

The SHARE Forum has created in the past 20 years an essential networking platform for professionals in the AEC (architecture, engineering and constructions) industries from Central and Eastern Europe. The forums create an efficient platform for getting in contact with and understanding the diversity of the contemporary architectural phenomenon.  Presently, the SHARE events are held in 10 countries from Central and eastern Europe and the SHARE Community has over 50.000 members worldwide.