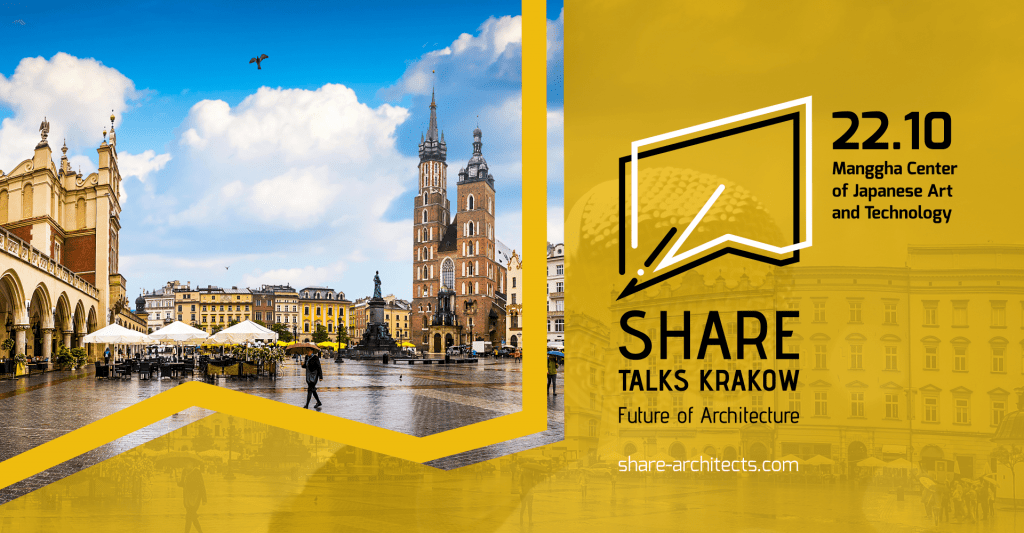 A visionary approach to the Future of Architecture! SHARE Talks Kraków 2019

SHARE TALKS Kraków 2019, with the theme “The future of Architecture”, will take place on the 22nd of October at the Manggha Center of Japanese Art and Technology, Kraków. This edition is a closeup of the way architecture is evolving, and it brings lectures from an international panel of speakers. The event is organized alongside Andrzej Frycz Modrzewski Krakow University.

Part of SHARE Architects 2019 European program, SHARE TALKS Kraków 2019 will feature lectures from international speakers followed by debates on the theme “The Future of Architecture”. The event will also host the launch of the book “Designing the profile of the future architect”.

XTU is an award-winning architecture and design firm founded in 2000 by principal architects Anouk Legendre and Nicolas Desmazieres. Located in Paris, France, XTU specializes primarily in academic and environmental research in addition to residential and cultural buildings.

The portfolio of the firm displays several museum projects beginning with the Jeongkok Museum in South Korea followed by the Museum of Civilizations on Reunion Island and the Cite du Vin museum in Bordeaux. The firm was also responsible for the French Pavilion at the Milan Expo in 2015. In these projects, XTU explores complex geometries with the integration of parametric design. A free and organic approach encourages the use of a wooden structure synchronized in 3D.

For 20 years Davide Macullo was project architect in the atelier of Mario Botta with responsibility for over 200 international projects worldwide. He opened his own atelier in 2000. The ethos of the Davide Macullo Architects studio has developed into one of ‘cross-experiences’ and promotes an open and cultural exchange with architects and collaborators coming from different backgrounds.

The work of the Studio has received awards, been published and exhibited widely both at home and abroad; in Switzerland, Italy, France, Greece, Germany, Austria, Hungary, Slovenia, Turkey, Russia, China, Korea, Australia, Argentina, Ireland, UK and in the US and has just published SWISSMADEINITALY, which focuses on eight of its residential projects in Ticino. Davide has also lectured on the work of the Studio at the Architektursalon in Munich, CAFA Beijing, Seoul National University, IUAV Venice, Florence Kent University, the International Convention of Architecture in Budapest and at the China Building Decoration Association.

He leads MVRDV’s department for large scale, complex buildings in the Netherlands and abroad. As a Director, Maasland oversees all the projects in his Studio.With his hands-on work method, he is directly involved in the construction of multiple projects, making sure that the expectations for design are maintained until the building is complete. Currently, he coordinates different Dutch projects: the construction of Valley, a 75.000 m2 multifunctional building in the business district of Amsterdam, the construction of two Grotius towers, a 61.800 m2 residential project in the Hague, and the transformation of Jaarbeurs in Utrecht, a trade fair of 170.000m2. Besides this, Maasland is working on several projects in Eindhoven, Poland and the UK.

Enota was founded in 1998 by Aljoša Dekleva, Dean Lah and Milan Tomac with the ambition to create a contemporary and critical architectural practice of an open type based on a collective approach to the development of architectural and urban solutions. Enota’s team of architects focuses on research-driven design of the environment where the study of contemporary social organizations and the use of new technologies are interwoven to produce innovative and effective solutions. Enota’s solutions are strongly influenced by research, reinterpretation and development of social, organizational and design algorithms that derive from nature. The result is always a strong binding of the buildings with the environment that surrounds them.

The Studio provides a comprehensive technical building control by thoroughly controlling the construction and project budget as well as it assumes responsibility for obtaining the building use permit. The core of the Studio is made up of specialists with vast professional experience who have co-operated with each other for several years. Owing to the training and education cycle having been intentionally carried out, the company employs ten project managers, whose expertise and talent enable management of the project from the stage of creative concept through to the execution of the structure. Over 100 persons in total are constantly involved in the company’s projects.

“Designing the profile of the future architect” is the first editorial project initiated by SHARE architects and it is a book that highlights 100 international contributions, texts and interviews collected from guest speakers of the SHARE International Forum from the 10 countries where it is held each year. The book will be presented by Architect Krzysztof INGARDEN, Chairman of the conference and Founder of INGARDEN & EWY ARCHITEKCI. The project could not have been possible without the support of the SHARE Society, an exclusive group of architects, speakers at the SHARE International Forum, with the mission to unite the architecture world, within a framework through which architects can confront ideas and conceptions, acting as a catalyst for debates and actions.

Special Polish Guests at the debate on “The Future of Architecture”

Wojciech KOSIŃSKI delivered several dozen papers at conferences and at scientific meetings of the Polish Academy of Sciences in Krakow. He is a co-author of many important types of research works in the field of architecture, urban planning and spatial planning. A supporter of promoting professional issues in the media – co-author and participant of educational television programs, author of numerous popular science articles, including in “Architecture” and “Aura”, editor of the “WA WA Yearbook”.

An activist of the Presidium of the Main Board and SARP Council in Warsaw, the College of Competition Judges in Krakow, Commissioner of the Architecture Biennale. Decorated with the Golden Cross of Merit (1987). Deputy chief architect of Krakow in 1990-1992.

As principal of Artur Jasiński and Partners he was awarded over twenty prizes and mentions in architectural competitions, he is also the author of many public buildings. His research and publications focus on the impact of contemporary modernization and globalization processes on urbanism, architecture, and professional practice.

Since 1988 he has worked with the architect Kazimierz Łatak and in 1995 they founded their own Studio, Biuro Projektów Lewicki Łatak which, renowned in the area, has won several prizes in architecture competitions for projects including the Ghetto Heroes Square, Nowy Square, the Krakow Centenary Stadium, and the Kazimierz, a pedestrian and bicycle bridge over the Vistula River in Ludwinów. The Heroes of the Ghetto Square received an Honorary Mention in the European prize for Urban Public Space (Barcelona 2006) and the Gold Award in the Urban Quality Award (Frankfurt am Main, 2011). The Biuro Projektów Lewicki Łatak studio also received the SARP Prize for Architectural Design in 2004 and the Annual Award from the Ministry of Culture and National Heritage in 2018.

He also writes about architecture in magazines and is active as the judge in architectural competitions.