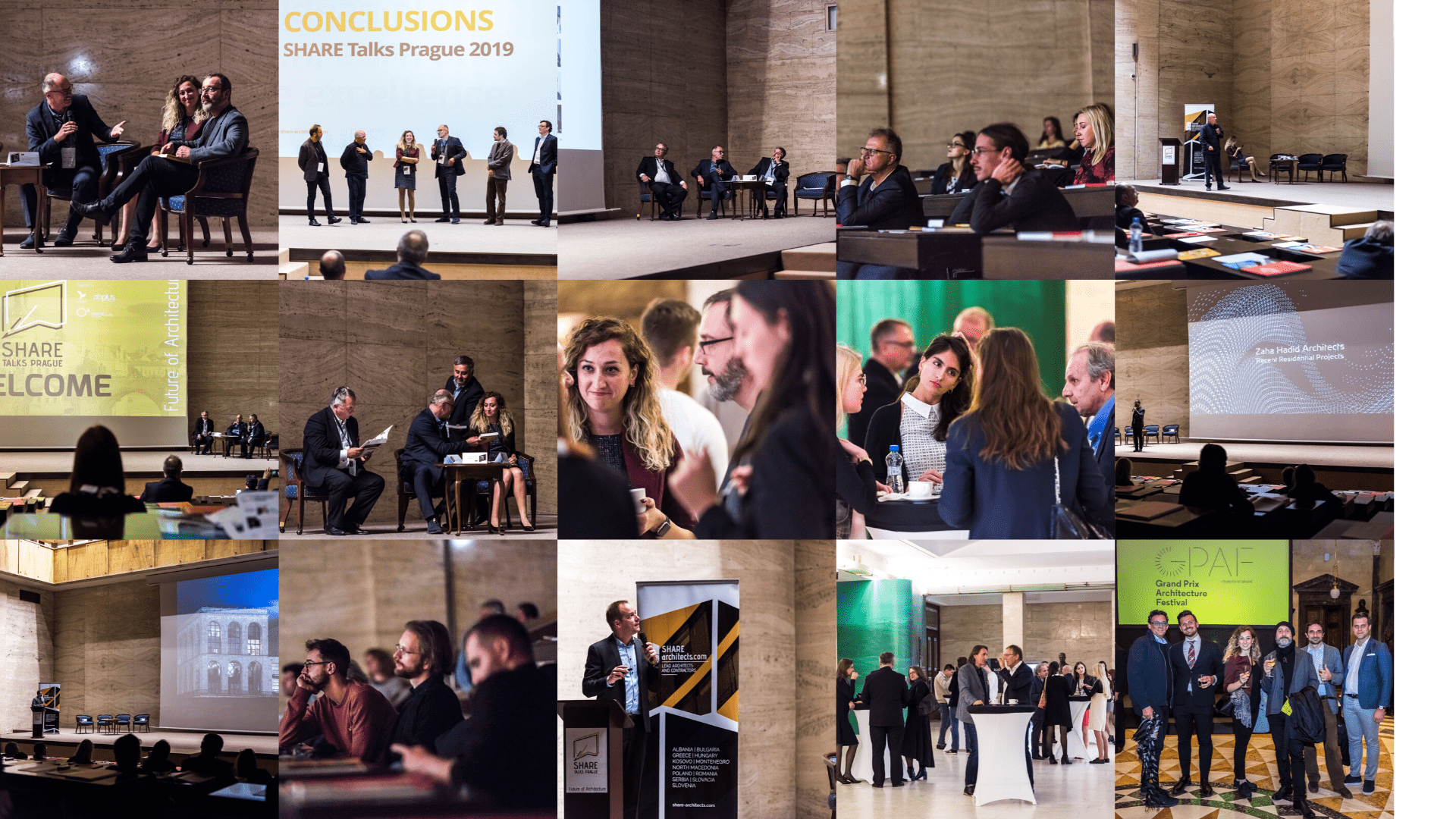 On October 3, we’ve had the honor to organize a different type of SHARE conference in Prague, at The New Building of the National Museum. SHARE Talks Prague 2019 was themed “the future of architecture” and it brought on stage an elite panel of 7 speakers from 7 countries who covered talks and debates on the latest innovations shaping the future of architecture.

Our vision for SHARE Talks Prague 2019 was to put together a closeup where our delegates had the opportunity to participate in debates and listen to insightful project presentations of our speakers. Promising to become a landmark for cultural architectural events in the Czech Republic, SHARE TALKS PRAGUE 2019 was organized alongside the Czech Society of Architects and it gathered some of the most important contemporary architects as speakers. The event also hosted the launch of the book “Designing the profile of the future architect”.

SHARE Talks Prague 2019 was organized in collaboration with Grand Prix Architektů, the second consecutive architectural show in the Czech Republic where over 300 project entries will battle to win the Blue Cube, GPA 2019 – Grand Prix of Architects 2019.

A Message from Organizers & Supporters

Book launch – “Designing the Profile of the Future Architect”

Upcoming next was a presentation on our recently launched book, “Designing the Profile of the Future Architect”. Presented by our book content curators, Arch. Șerban ȚIGĂNAȘ, General Secretary of the International Union of Architects (UIA) and SHARE Society President, the book is the first editorial project of SHARE Society, a collection of thoughts, architectural manifestoes, and interviews to which 100 architects from 27 countries have contributed; all of them former speakers at the SHARE conferences during 2018 – 2019.

Among some of the greatest awards received over the years, we mention Winner “Architectural valorization of a historical building in c.so Venezia, Milano” /with Quattroassociati, winner “International competition for the Park in new city fairground redevelopment area, so-called Citylife” in Milan /with Gustafson Porter, !Melk, Ove Arup e One Works, winner “Valorisation of the waterfront of Lake Como” /with Cino Zucchi, “Exterior lighting of the Cassino Abbey” /with Cassino University, winner “International competition for the valorization of 25 monumental sites in Matera”, winner “Building in the waterfront of Trieste” /with Mario Bellini. The project has been shown at the Architectural Biennale in Venice.

Arch. Maurizio MEOSSI, Senior Associate at Zaha Hadid Architects – UK, introduced us to “ZHA – Recent Residential Projects” –  a presentation that focused on the current set out of the office and then focus on the topic of the most recent Residential Projects, with an overview of the production of the last 10 years and more specific presentation of 3 case study projects in 3 different continents which he has personally directed.

“The Game as a mechanism of social interaction”, Giancarlo MAZZANTI – ITALY

Giancarlo MAZZANTI, Founder El Equipo Mazzanti, spoke about “The Game as a mechanism of social interaction” at SHARE Talks Prague 2019 – “We believe that the value of architecture lies not only in itself but in what it produces, in its performative capacities rather than in its representational capacities, that is why we are interested in an architecture that is defined by what it does and not by its substance. Just like games, architecture is a social phenomenon based on rules; when they are used, they are appropriate. Games and architecture redefine relationships, roles, and situations in already established contexts, being able to generate knowledge and learning.”

Arch. Murat TABANLIOĞLU, Founding Partner at Tabanlıoğlu Architects, introduced us to some of his office’s most exceptional architectural projects in a presentation titled “Looking Back – Looking Forward”. Tabanlıoğlu Architects is an award-winning practice developing projects on four continents. With a list of multiple awarded projects, Murat Tabanlıoğlu lectures at universities and various international platforms, as well as managing his atelier program at Istanbul Bilgi University.

In addition to his national and international contributions as a jury member, such as at AIA and WAF, Murat served on the Master Jury for the 2013 Cycle of the Aga Khan Award for Architecture. In 2014 he has been granted the great honor of curating the first Pavilion of Turkey at the 14th International Architecture Exhibition at the Venice Biennale. In 2015, he has been the curator of “Port City Talks. Istanbul. Antwerp.” exhibition at MAS Antwerp, as a major event of Europalia 2015 Turkey.

A big “thank you” to all of our main partners at SHARE Talks Prague 2019: ŞIŞECAM FLAT GLASS and Zumtobel Group.