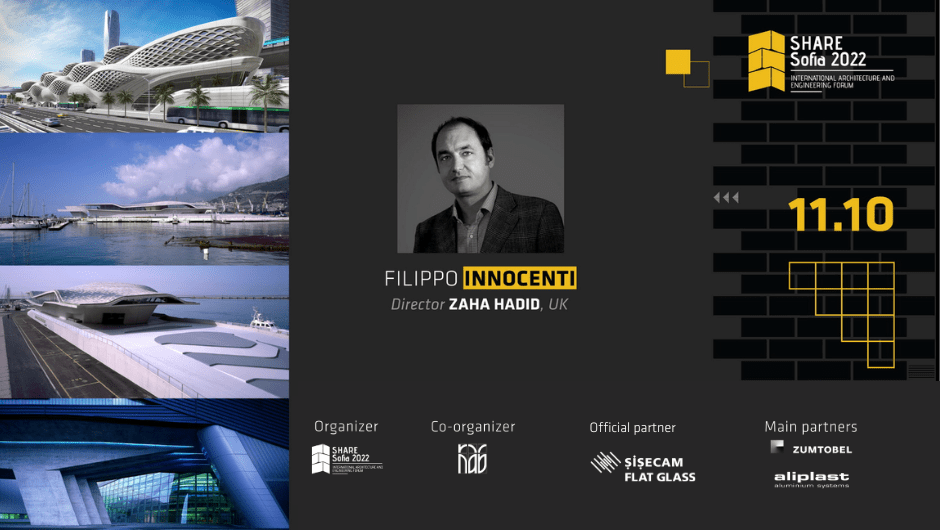 FILIPPO INNOCENTI, Director ZAHA HADID ARCHITECTS will be a keynote speaker at the SHARE Sofia 2022 forum on 11 October

SHARE Sofia 2022 will focus on design and performance for the next generation of facades and their impact on improving public space, as well as showcasing major developments in Bulgaria and internationally.

Filippo has worked with Zaha Hadid since 2002. With an architectural background that encompasses cultural facilities, conservation and sustainability, Filippo has specialized in the design of transportation buildings, opening ZHA’s successful entry into the infrastructural sector with the design of the first train stations. Co-director of the firm’s office in Rome, from 2005 to 2012 he has contributed to some of the most significant achievements of the office. His key projects include the multi-awarded Naples-Afragola High-Speed Train Station, the Riyadh KAFD Metro Station, and the Navi Mumbai International Airport. More recently, he has been project director for the New Riyadh Airport and for Shenzhen Xili Transit Hub.

Responsible for ZHA’s contribute to Hyperloop Italia research platform, his expertise spans also across different fields with the Guangzhou Opera House and the Reggio Calabria Museum of Mediterranean. Filippo has been teaching Architectural Design at the Florence University of Architecture and Construction Technology at the Milan Politecnico, for a number of years. As a researcher, he’s been part of the Italian Digital Avant-garde with a pioneeristic work on sustainable cities and self-growing materials.

Zaha Hadid Architects was founded in 1979 and has been at the forefront of architecture, art, and design for 40 years. Now 400 strong, based in London and with offices in Beijing, New York, Hong Kong, Mexico City, and Dubai, we are known internationally for dynamic and innovative projects which build on Zaha’s revolutionary exploration and research in the interrelated fields of urbanism, architecture, and design. Over four decades of practice, Zaha Hadid Architects has created a unique aesthetic that is at once unclassifiable and yet instantly recognisable for its clarity of vision.

Join the network of architects in Bulgaria.
Get started today!