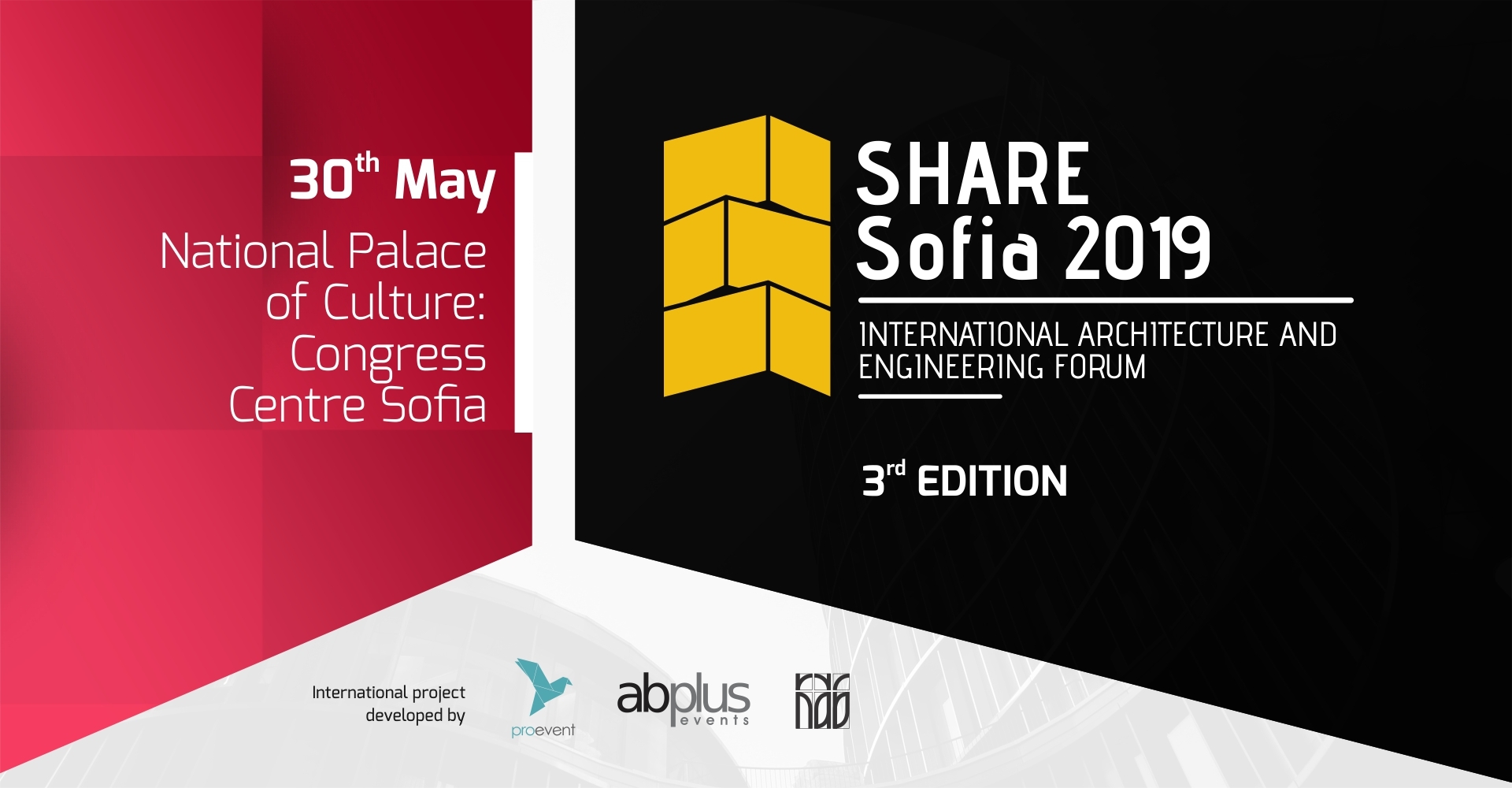 Following a year of insightful and exciting conferences spread across Eastern Europe, SHARE Architects continues its mission to bring excellence in architecture with the 3rd edition of SHARE in Sofia, Bulgaria. Join us on May 30th, at National Palace of Culture – Congress Centre Sofia for a full day of interactive talks on all things architecture-related. It’s time to put creative ideas in the right context. At SHARE Sofia you’ll have the opportunity to learn, interact with like-minded people, and find inspiration for your next big project.
SHARE Forum is one of the essential networking platforms for the construction-related fields in Central and Eastern Europe. We bring together principal and senior architects from leading practices to discuss their recently awarded projects from the greatest architectural competitions worldwide.

Location: National Palace of Culture – Congress Centre Sofia
Date & Time: 30th May at 9:00 – 18:00
Audience: Everyone from the architectural field is welcome to attend our event. Tickets are already available on our website (see the link on the right).

We invite you to meet our speakers and register for SHARE Sofia 2019!

Ross Barney is a graduate of the University of Illinois. Following graduation, she served as a U.S. Peace Corps volunteer in Costa Rica planning national parks. She teaches an advanced Design Studio at IIT and serves on their College Board of Overseers. Carol’s work has been honored with over 100 major design awards, including six national American Institute of Architects Institute Honor Awards, over 40 AIA Chicago Awards, two AIA Committee on the Environment (COTE) Top Ten Project Awards, and the AIA Chicago Lifetime Achievement Award, the AIA Thomas Jefferson Award for Public Architecture and the AIA Illinois Gold Medal, all for a distinguished body of work. She was named as a “Game changer” by Metropolis magazine in 2018. For nearly two decades, Carol’s studio has been working along Chicago’s Rivers. These efforts include the design of the Chicago Riverwalk and studies on all one-hundred-and-fifty-miles of riverfront across the city. The goal: reconnect people with the dynamic and changing life of the City’s natural resources.

Julian Weyer was born in Berlin, and has lived in Denmark since 1975, where he finished his studies at the Aarhus School of Architecture in 1994. Since then, he has lectured at the School of Architecture, and worked professionally as an architect and at C.F. Møller Architects, before becoming a partner of C.F. Møller Architects in 2007. Julian Weyer has extensive experience in the field of architecture, landscape architecture and urban design, including numerous competition wins and award-winning designs. He is working on projects in Denmark, Germany and the UK as well as worldwide. He is also a frequent lecturer worldwide and author of articles and book publications.

Stanisław Deńko was born in 1943 in Dobczyce to a judge father and his school teacher wife. Mr. Deńko’s wife, Iwona Deńko, is also an architect, similarly to their younger daughter, Małgorzata, who also acts as the office’s partner. He had the opportunity to design (main projects): Embassy of the Republic of Poland in New Delhi, India (1973-78), Own house in Lubomierz (1975), Krakow-Balice John Paul II International Airport Terminal I (1989-94) and later extension (1999-2001), Sinsen Panorama residential building in Oslo, Norway (2000-04).

Dean Lah was born in 1971 in Maribor, Slovenia and graduated from the Ljubljana Faculty of Architecture in 1998. In the same year he cofounded the architectural office Enota where he works as partner architect ever since. For his work in Enota he received many architectural awards, his work has been presented on numerous exhibitions and published in professional and broad interest publications all over the world.

Eleftheria Deco, is a well-known lighting designer in the entertainment industry. Since 1990 she has designed the lighting of more than 450 plays, music and dance performances, operas and art installations for which she has received great reviews and awards, including the “Woman Artist of the Year 2009” for her contribution to the arts and performances as a lighting designer in Greece.

Matej Blenkuš is an associate professor and dean at the Faculty of Architecture, the University of Ljubljana where he teaches subject Structures and Design Studio. He graduated and received his PhD at the Faculty of Architecture, University of Ljubljana. He gave lectures on the Days of Oris in Zagreb and the Piran Days of Architecture, but also at the faculties and conferences in Graz, Zagreb, Split and Frankfurt. The works of abiro were exhibited in 2002 and 2008 in the Cankarjev dom in Ljubljana and published in a monograph in 2015 by the Museum of architecture and design Slovenia.

Over the years of his professional career, Arch.Zahariev has built up great design experience on the local market and excellent network among the local and international professionals. As a leader of the A&A Architects’ design team Arch.Zahariev has been responsible for the design of some of the most recognizable projects in recent times in Bulgaria, such as: Business Park Sofia, Capital Fort, Muzeiko and many others.

Tihomir Kazakov is a specialist on local parameters and codes of practice and is the a Co-Chairman of the Architects Union in Bulgaria. Tihomir is involved in the coordination of our Moscow projects and is jointly responsible for management and development of Sofia office and is responsible for seeking and delivering opportunities locally and coordinating practice policy including: Creative Co-Director for steering practice design policy/staff education and development.