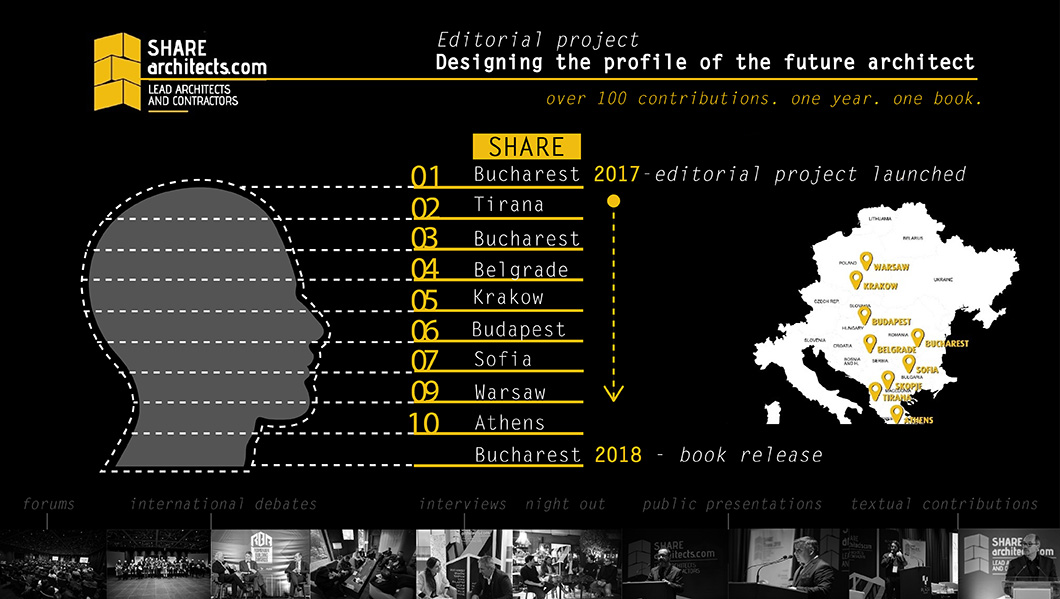 Over 100 Contributions. One Year. One Book.

I invited Maurizio Meossi to tell me how he envision himself in the future: ”Younger”, he answered firmly. I subtly tried to hide my wonder but his philosophy became clear when confessing that the best piece of advice he received from Zaha Hadid was to “challenge yourself constantly; push the limits everytime”. Is this what makes Zaha Hadid Architects so special? Yes…and the people working there. “Our office…the biggest project we have ever put together is the office itself. “

Tirana – 2018, at Plaza Hotel, 250 architects from all over Albania and abroad came together to celebrate architecture at its highest level. We were gathering contributions for our editorial project “Designing the Profile of the Future Architect”, a book to be published at the end of this year. The new chapter cover the views  of 11 architects: Maurizio Meossi, Xander Vermeulen Windsant, Habibeh Madjdabadi, Perparim Rama, Astrit Nixha, Besian Mehmeti, Giuseppe Farris, Arianit Loxha, Carlo Berarducci, Olsi Eftihmi and Jurtin Hajro.

”For me the future is…something to enjoy my job”

A recurrent theme this edition referred to the joy that should be maintained and fueled throughout the whole process of making architecture. ”If you are busy for 5 years on a project” – said Xander Vermeulen Windsant, winner of 2017 Mies Van der Rohe Award for Architecture – „than it would better be fun on the way there. If you are only concerned about the problems, than these 5 years will be a misery. During the project you will be collaborating with a lot of people. (…) It should be fun, it should be something positive.”. Perparim Rama, Founding Director of 4M GROUP, induced a similar idea saying that he strongly believes that ”we need to have fun during the process;  everybody talks about architecture as difficult, as hard work, of course… unless you have passion for it”. ”For me the future is …something to enjoy my job”. concluded Jurtin Hajro the curator of Albanian Pavilion for Venice Biennale 2018.

Astrit Nixha, president of Kosovo Association of Architects with over 20 years of architectural and managerial experience made a call to work of high quality which will give in return unexpected rewards: ”Instead of doing 10 projects at once, you do two, but those two – you can do it properly that means that you have to get the whole enjoyment out of that. I did have 10 projects, I did have 45 people working for me, I’m out of that” he laughs. He added that this situation is compensatory because now you get paid by your enthusiasm and satisfaction of your work. He explained that usually,  we have expenditure as much as we have incomes, therefore either in the first or second case you end up with very little profit/zero profit, but in the second situation, ” what I do now with the zero” he added ….”I enjoy!” .

He was also an advocator of being original: ”Do not copy, be your own self (…) because you cannot be fulfilled by being somebody’s copy, you need to be YOU in order to be fulfilled and that’s very important for our society and for the world in general because unfulfilled people are unhappy and frustrated people are dangerous for our society, they can never build good buildings, good environments” . A similar idea was induced into the discussion by Perparim Rama in extenso, who believes that unless you get to know yourself, know who you are, what you want and where you want to go – and be comfortable, sincere and true to yourself-   you cannot be original and build quality architecture. ”Never be scared by the unknown” he added, ”because the unknown is where the excitement is, where the innovation is, where miracles happen”.

”The future is about humanity”

If you aspire to a job offered by Astrit Nixha, the question of what kind of music do you listen will make the difference, because ,,he thinks in the same way I do. It’s an assurance that  I’ll go a long way with that person”. For Xander Vermeulen Windsant instead, modesty is the quality he would appreciate the most while Olsi Efthimi consider that ,, the best quality that the architect should have is the humanism, the empathy. Maybe in this tremendous speed world that we are living, we are losing some of the most important values. And the best of these is the humanism. The architects must be poets, artists, musicians, fathers, lovers, everything. The future is about humanity” . Perparim Rama adhere also to this directions when saying that ”The profile of the future architect needs to understand what it means to be a human, from an conscious and subconscious perspective” and in this respect ”Architecture should not be perfect, should not try to get everything organized, it should have its own fault but perfect meaning; practically, in imperfections we found the humanism.” (Astrit Nixha)

”Cooperation is the future of everything in architecture”

Maurizio Meossi consider that the role of the architect nowadays is different than a few centuries ago: ”In our project we end up being a director, a director means being in the role of coordinating different professionists from the world of industry, structure, mechanics, which nowadays works more like an organism, therefore is not purely putting one brick on top of the other”. Understanding this new role, the architects should strengthen the collaborations as Giuseppe Farris judge that ”cooperation is the future of everything in architecture”. In this picture, ”the architect of today, wishing to work on the issues of tomorrow, will therefore have to be part of a wider agenda, beyond the spatial, and work within a team of experts from other disciplines”, Xander Vermeulen Windsant believes. In order to have a timely impact and preserve its relevance, architecture have to become an integral part of multidisciplinary proposals.

The iranian architect Habibeh Madjdabadi apprehend that ,,the role of the architect is to recognize priorities and to understand which aspects of the project can inspire the main architectural solutions”. This happens because ”every new project encompasses its idea within it, the project itself suggests what to do and what not to do. The right solution lies within the project conditions: context, time, sociocultural issues, budget, available materials and techniques”.

Architects have to imagine how to create bridges of communication with / between different actors and to agree on  being ,, the master of networking and the master of communication”(Jurtin Hajro) this being an idea recalled also by Besian Mehmeti who came across while practicing architecture  that “communication is the key” either it is communicating through social media or communicating inside the team. Communication must also be made at the level of architect’s mission, the practitioners being invited to be always one step ahead because ”the interesting thing is that for people (other than architects) is very difficult to imagine a place or a space in the city in a different way than it is at the moment. We, as architects, we can see alternate realities in every place. And to make this a reality, you don’t have to make a complete plan, you have to plant the idea into somebody else’s head that this place could be something completely different(..). Our imagination can generate very much with only a little – but strategically sensitive – work, it can generate an opening from which new things can start to emerge”. (Xander Vermeulen Windsant)

”Architect has a definition that need to be redefined throughout time, continuously”

Xander Vermeulen Windsant made a call to be honest with ourselves in recognizing the ‘inconvenient’ truth that ”the issues we, as architects, could – and should – be contributing to, are not primarily architectural (anymore)”. There are social issues, for instance, which sometimes are looking for a resolution through the medium of architecture.  A future career that should be ”inspirational, creative, innovative, fascinating, complex, interdisciplinary, inclusive and above all adaptable.” (Arianit Loxha) should be also open to embrace the change, new fields and the continuous redefining of its definition.

Regarding the interferences with new challenges, the italian architect Carlo Berarducci prospect the idea that ,,Digitization of urban services networks will transform cities into computers to be inhabited. Information technology will be more and more present, changing customs” because, as put by Perparim Rama, ,,at some point machines soon there will be a complete and invisible fusion between the bodies, buildings, transportation systems and information.”

For the macedonian architect Besian Mehmeti, „all the automatics, robotics – they will be more and more part of our job and we should not see them as a threat, rather as a tool to come up with a new architecture. Globalization is not a threat, it’s an opportunity.” Giuseppe Farris, italian architect who established his office in Belgium finds globalization ”interesting if you use it to make links. But the link for me is much wider than the image. The image is not interesting. It’s more interesting the way that they dealt with a problem”. He notice that we live a moment when everything is very fast and it is fast because of these extreme communication in the social media and television where we have only images and where you ”don’t see the architecture anymore, you see only the images”.

”Being responsible, and also being responsive, being into his time, trying to understand its culture, trying to understand its society” is what Maurizio Meossi advise the young architects. As respects to women in architecture, Habibeh Madjdabadi draws attention that ”obstacles female architects face, are more internal than external barriers. Sometimes they consciously choose to be number two. I believe that women should be confident and not to be afraid of taking more dominant roles”.

We usually refer to The Future Architect  as a prospective project, but ”the future doesn’t always mean novelty and going forward” she  drew our attention. ,,Through history, progress has not been linear, like a straight line. It has ups and downs and it is most likely a dashed line, where after a while you realize there are blank spaces left behind. To think of the future perspective, sometimes you need to go back to the past and learn about the past. We get something while sacrificing a lot of other things. Therefore, we need to go back and reinstate things that have been put aside with no reason.”

Returning to the prospect of the architect being constantly younger in the future, it is necessary to synergistically cooperate with the past and the present to stay a young spirit. And the bet is not easy at all… as ”there is no doubt that the profession of Architect is one of the most complex professions of all times”. (Arianit Loxha)