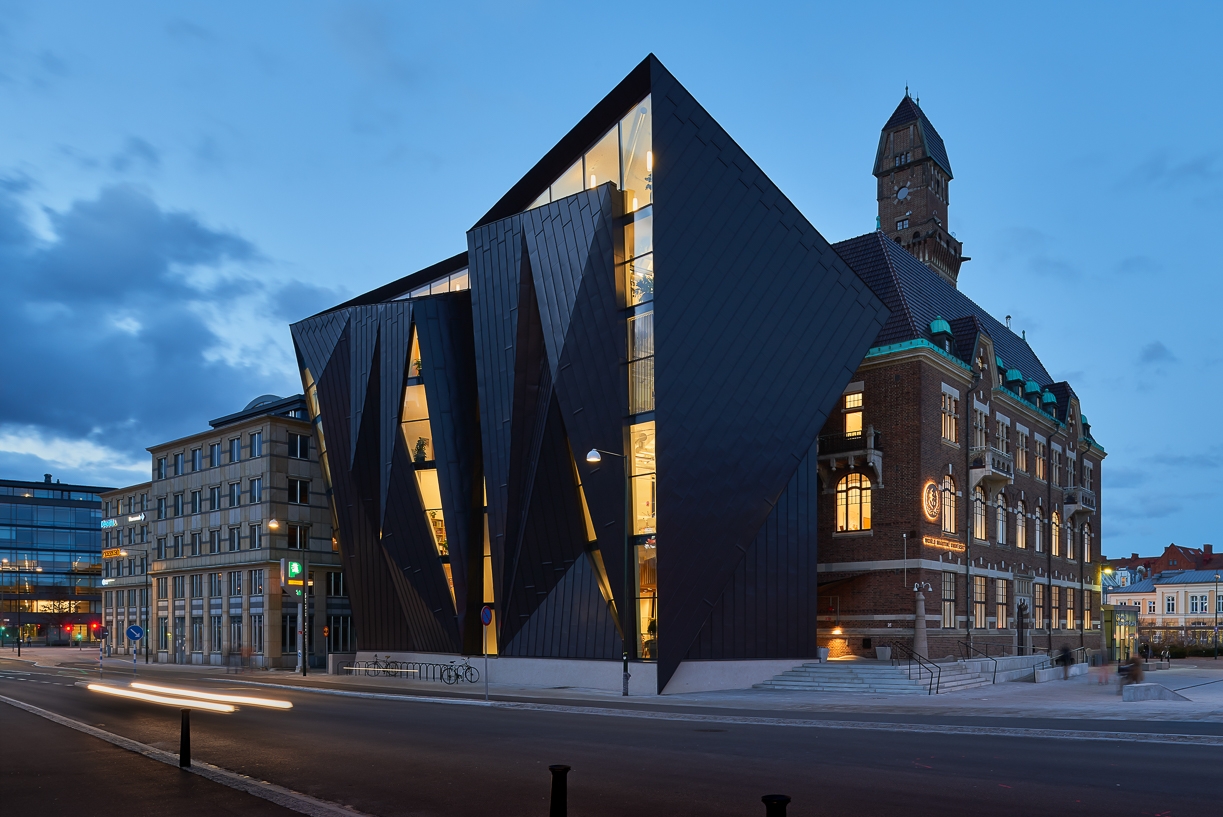 Gerard Reinmuth is the director of Terroir, Australia, an architectural practice that focuses on the cultural implications of architecture; he is also appointed as Professor in Practice at the University of Technology Sydney from 2011, while coordinating the Masters Course at the same university. This year he will be a guest speaker both at RIFF Bucharest on 31st October and RIFF Warsaw on 11st October, presenting the winning proposal of the international competition for the World Maritime University in Malmo, Sweden. Being one of the latest built projects of his practice, this particular design was elaborated in collaboration with Kim Utzon Arkitekter.

The building is meant to act as a “hinge” as its authors define it, articulating its surroundings – old town fragments and the harbor area – and at the same time establishing a strong volumetric and programmatic relationship with the existing part of the original Tornhuset – the existing building it is juxtaposed to. The closeness between the two buildings – old and new – is formally expressed through the folded plate silhouette of the addition which seems to be a reference to the roof of the Tornhuset; this morphological characteristic permits also a gradual distancing from the existing building thus shaping a luminous public void between the two buildings. The reference goes beyond form finding towards the materiality of the new building, the cladding material chosen according to both Swedish and Australian traditional roofing style with painted metal sheets is aluminum sheeting.

The cosmopolitan nature of TERROIR as a versatile architectural practice anchored in contemporary architectural realities is proven through this particular project by the collaboration throughout the whole design and building process with the local practice Kim Utzon Arkitekter. Moreover, TERROIR’s work approaches architecture through exhibitions, teaching and writing and is being featured as a praiseworthy emerging practice by Phaidon or AV Monographs, while also being published in a monograph titled TERROIR: Cosmopolitan Ground in 2007.  The scale of their international implication regarding the architectural profession is being given by their constant participation in international exhibitions like the Venice Biennale in 2008 and 2010, featured in the Australian Pavilion, or in 2012, featured both in the Danish and Australian Pavilion. Current projects underway include a 400-student accommodation building covering a whole city block in Hobart, the extension to the old customs house in Malmo, Sweden (as a maritime university for the United Nations) and a range of other projects from small houses to a $400M hospital in central Copenhagen.

As stated by the practice, “Gerard’s current role is split between his Directorship of TERROIR’s Sydney and Copenhagen offices and his Professorial role at UTS.  This crossover of practice and research is centered on questions around the agency of the architect in making our cities and the future of the profession in a globalized interconnected world marked by ever increasing flows of capital and expertise and where the traditional conception of the architect are not always valid and have been replaced by new forms of architectural work”. While this is merely a glimpse into their complex activity, more can be discovered by attending the two contributions Gerard Reinmuth will have during our RIFF events in Bucharest and Warsaw this October.