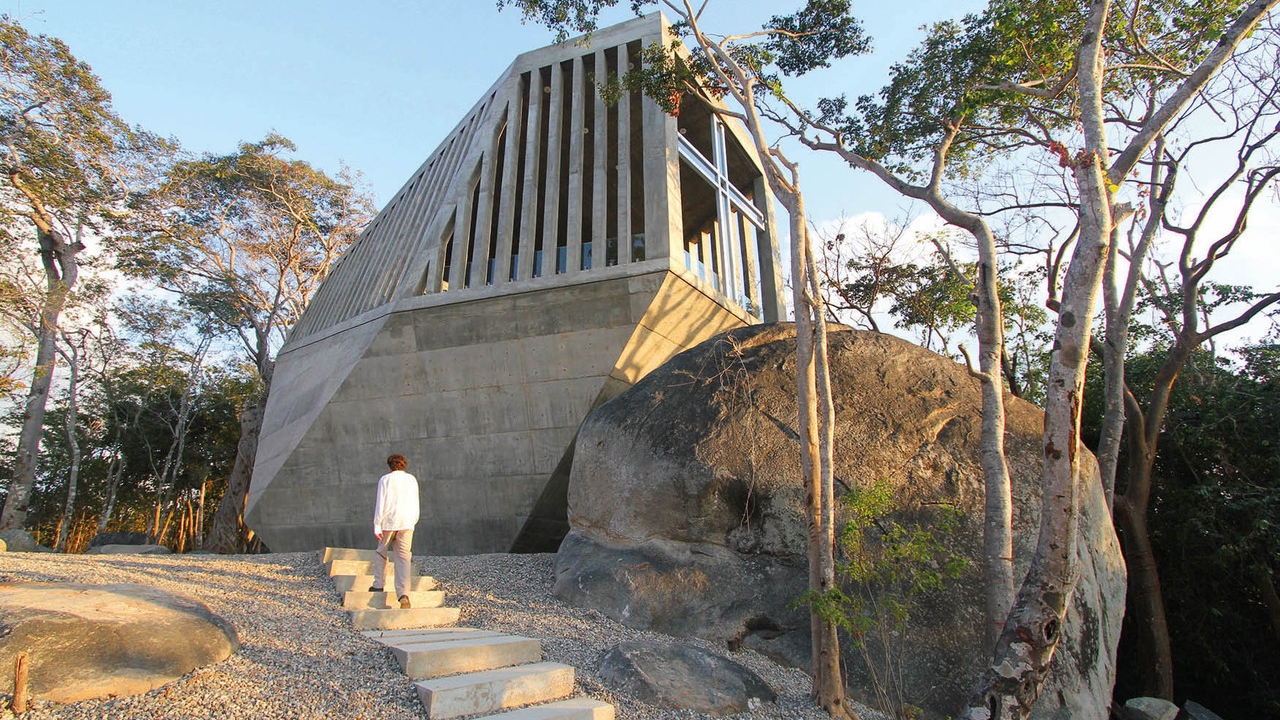 Esteban Suarez, founder of Bunker Arquitectura (BNKR) in Mexico City, will be a guest speaker at RIFF Warsaw 2016, with a presentation on Sunset Chapel, built in 2011 in Acapulco, Mexico.

Bunker Arquitectura is a Mexico City-based architecture, urbanism and research office founded by Esteban Suarez in 2005. In their short career they have been able to experience and experiment architecture in the broadest scale possible: from small iconic chapels for private clients to a master plan for an entire city. Bunker is a multidisciplinary team formed of architects, urban planners and designers. They ultimately believe in giving unique and outside the box solutions to specific problems, leaving behind the quest for a personal style or branded architecture. 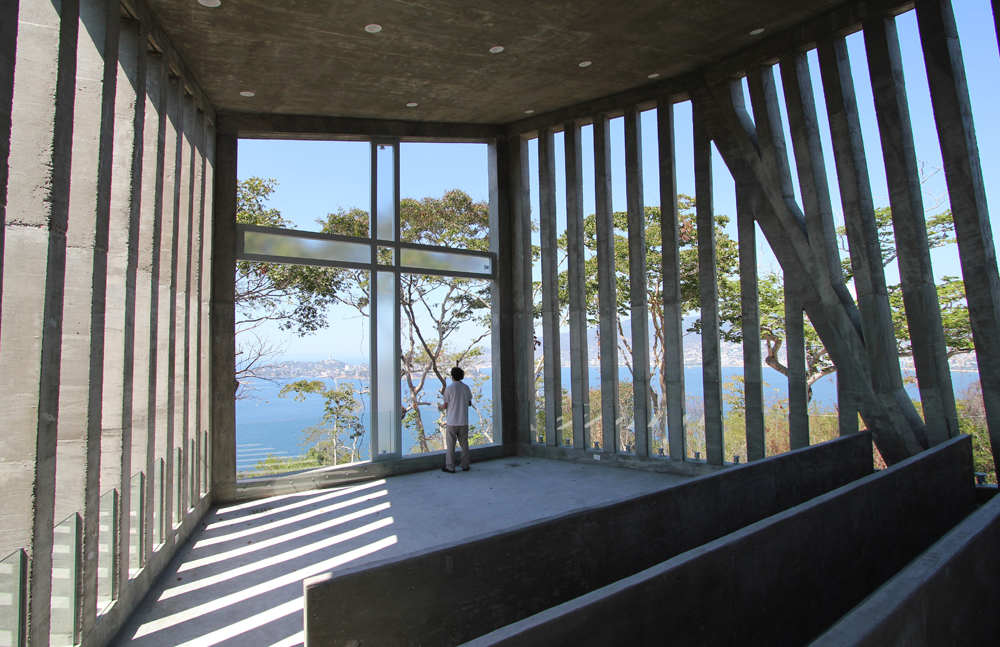 Our first religious commission, La Estancia Chapel, was a wedding chapel conceived to celebrate the first day of a couple’s new life. Our second religious commission had a diametrically opposite purpose: to mourn the passing of loved ones. This premise was the main driving force behind the design, the two had to be complete opposites, they were natural antagonists. While the former praised life, the latter grieved death. Through this game of contrasts all the decisions were made: Glass vs. Concrete, Transparency vs. Solidity, Ethereal vs. Heavy, Classical Proportions vs. Apparent Chaos, Vulnerable vs. Indestructible, Ephemeral vs. Lasting… 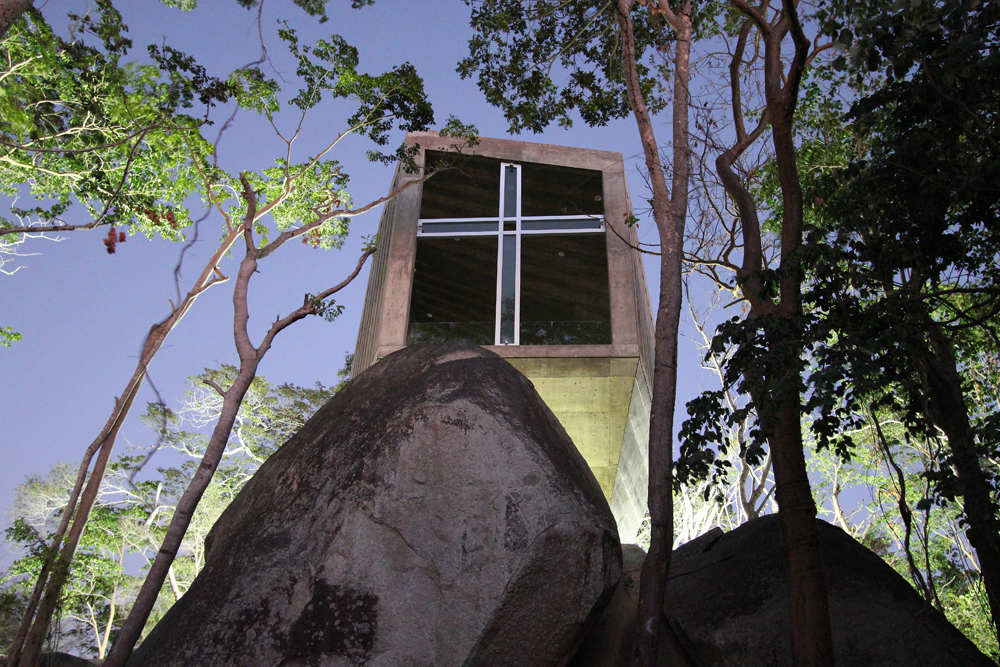 The client brief was pretty simple, almost naïve: First, the chapel had to take full advantage of the spectacular views. Second, the sun had to set exactly behind the altar cross (of course, this is only possible twice a year at the equinoxes). And last but not least, a section with the first phase of crypts had to be included outside and around the chapel. Metaphorically speaking, the mausoleum would be in perfect utopian synchrony with a celestial cycle of continuous renovation.

Two elements obstructed the principal views: large trees and abundant vegetation, and a behemoth of a boulder blocking the main sight of the sunset. In order to clear these obstructions (blowing up the gigantic rock was absolutely out of the question for ethical, spiritual, environmental and, yes, economical reasons) the level of the chapel had to be raised at least five meters. Since only exotic and picturesque vegetation surrounds this virgin oasis, we strived to make the least possible impact on the site, reducing the footprint of the building to nearly half the floor area of the upper level.

Acapulco’s hills are made up of huge granite rocks piled on top of each other. In a purely mimetic endeavor, we worked hard to make the chapel look like “just another”. 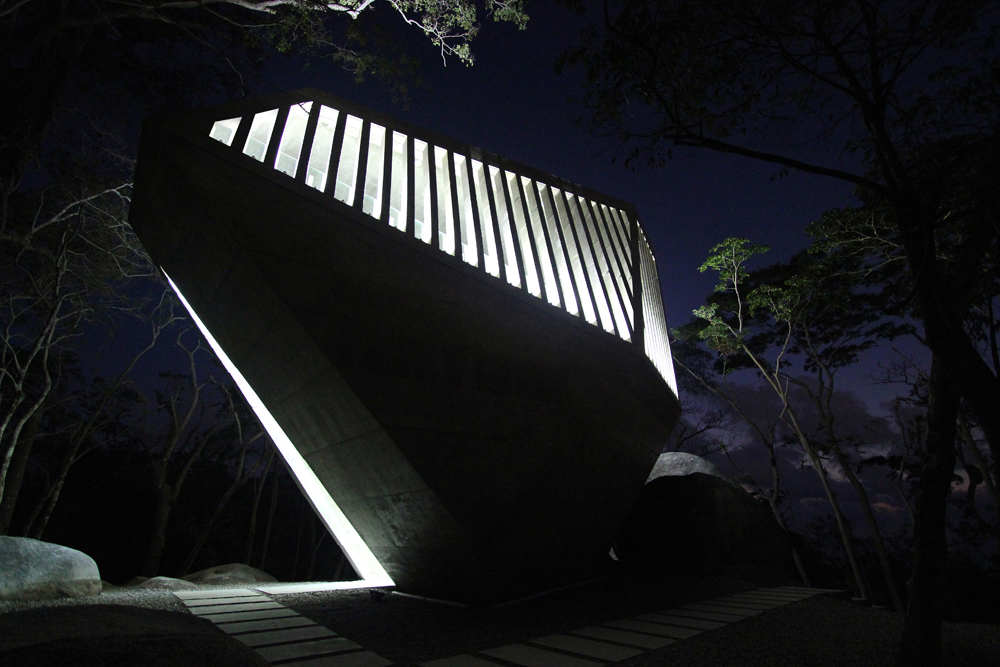