Following 7 incredible events – and a well-deserved summer break at SHARE – we’re getting ready for FALL season! Meet us in October and November in the following cities:

With over 3,500 attendees and 300+ speakers spread across 10 European countries in 2018, our mission to bring excellence in architecture continues with the 20th edition of SHARE in Bucharest, and also the 5th in our sequence of 12 events planned for 2019. The event took place on April 18, at Radisson Blu Hotel. We were delighted to welcome over 500 participants, 30+ speakers, and guests from 9 countries.

This year’s celebratory edition was filled with impressive talks and project presentations, instructive workshops, and debates that managed to answer some of our burning questions related to the field of architecture. Let us look at some of the best moments that made SHARE Bucharest 2019 a conference to remember.

The 20th edition of SHARE Bucharest 2019 kickstarted with a warm welcoming message from our event organizers and special guests.

Our series of special presentations at SHARE Bucharest 2019 continued with architect Vassilis SGOUTAS, Founder at Sgoutas Architects & UIA Past President – Greece, who held a presentation titled “Halls and Auditoria”. Furthermore, he introduced the audience to his recently published book, “A Journey with the Architects of the World”, a book that documents, in a special way, moments in the evolution of the profession and his architectural encounters over the last twenty years.

Architecture is more than a living space. It is a practice that concerns itself with the exploration of spatial concepts, experimenting with systems, geometries, and proportions. In many ways, architecture is a wonderful exploration of the human mind, a medium through which civilization propagates itself through time.

The Official Plenary Session opened with an introductory speech from our chairman, Alexandru Găvozdea / President Romanian Order of Architects – Romania. Next on stage was our keynote speaker for SHARE Bucharest, Fernando MENIS – founder at Menis Arquitectos, with a special presentation on one of his office’s most successful projects: “CKK Jordanki: Backstage”.

CKK Jordanki is located within a green ring around the historic city centre, overlooking the Vistula River. Therefore, special care was taken in designing the orientation and height of the volumes so that the presence of the new building establishes a harmonious relationship with the natural and built environment. Thus the building occupies half of the plot, the other half being dedicated to park and the height is kept as low as possible, to avoid blocking the view over the river. The visual effect achieved is that of a natural object, a rock embedded in a gently sloping meadow. (source text)

Lighting design speaker Cinzia FERRARA, founder at Ferrara Palladino Lightscape – Italy, joined us next on stage with a talk on some of her office’s most successful lighting projects. “The problem is that people think of LIGHT as something that is given – they take it for granted. You can only understand the power of something when you don’t have it – light: it very much resembles freedom.” The session continued with a speech held by Daniel MUSAT, Country Manager at Zumtobel Group – Romania.

We were delighted to have Great Speaker Jan KNIKKER, partner at MVRDV – Netherlands on stage at SHARE Bucharest 2019. His special presentation, titled “High-rise: green, social and human-scale” tackled the notion of sustainability lying at the core of the design process. Two of MVRDV’s most successful projects were presented, namely:

The Making of the World’s Tallest TV Tower | Mark HEMEL

From the Netherlands, we’ve had the honor to welcome architect Mark HEMEL, co-founder at IBA, who covered an exciting presentation on “The Making of the World’s Tallest TV Tower”.

Architecture cannot fully be photographed, not fully be described in text, and not fully be captured in an image”. The approach towards information-based architecture is best described in the design of Canton Tower, the world’s tallest TV tower, developed in collaboration with engineering firm ARUP. Spatially, the tower appears as a series of mini buildings hung within the superstructure. The roofs of the buildings are used as sky gardens where visitors can feel weather variations at different heights. After sunset, the tower appears as a luminous icon on Guangzhou’s skyline. 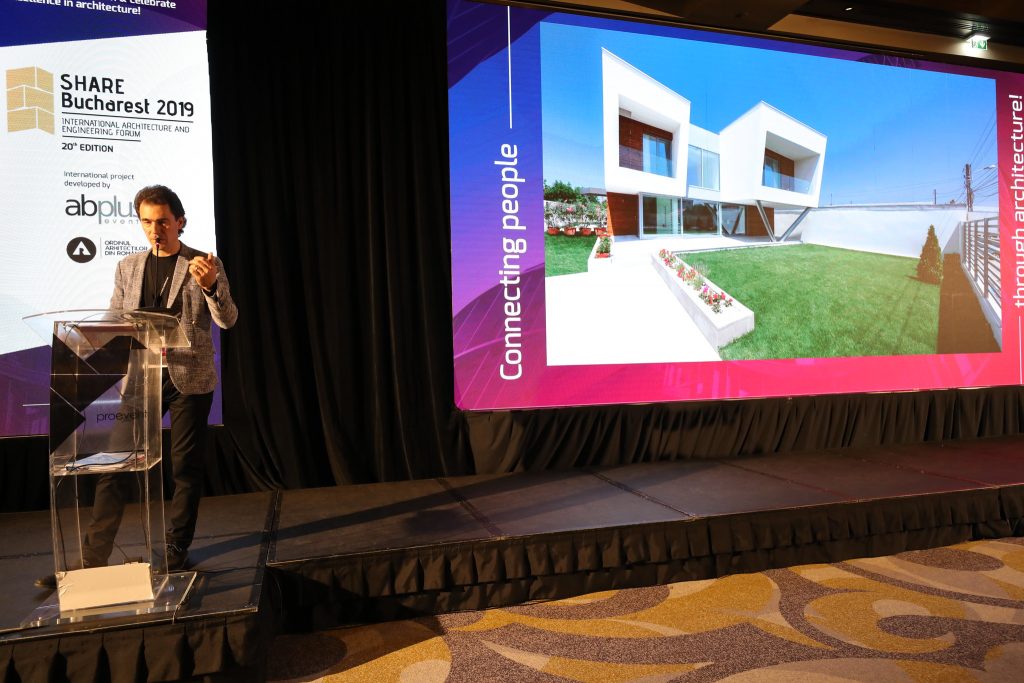 Architect Alfonso FEMIA, founder at Atelier Alfonso Femia – Italy, joined us at SHARE Bucharest 2019 as a guest speaker. His presentation covered one of his office’s most recent projects: the New BNL-BNP Paribas headquarters in Rome, part of the masterplan “Roma Tiburtina”.

Placed in a unique context – a layering of infrastructures that are separated by two important urban areas of Rome, the design of the new BNL headquarters was developed as a synthesis with the high-speed station of Tiburtina – characterized by size and horizontality.

Architect Andreas VARDAS, founder at Vardas Studio – Cyprus, followed next on the SHARE stage with a presentation titled “Glasshouses under the sun”; a project done in collaboration with architect Birute Varda.

AB house is the residence that the architect couple designed for themselves. After working together for years, Birute and Andreas decided to live on the site, favoring it for its location and morphology. Throughout the design process, they were determined to capture the essence of their architectural principles and make the most out of the creative freedom that comes with designing for themselves. The concept was born out of the combination of two materials often found near this location: concrete tube pipe sections and metal sheets.

The materials are interpreted here in the residence’s two separate envelopes: a metal structure clad in metal and glass, and the two walls of stacked concrete pipe sections running along the north and south facades of the residence. The layout of spaces is linear along the east-west axis. The open plan living area is to the east, providing a dining area, kitchen, and sitting area. Three bedrooms and a study are placed along a corridor-gallery that runs along the length of the house. Huge glass doors slide open to the decked veranda that runs outside to the south. The veranda is dispersed with garden pockets, containing small trees and fragrant plants.”

Several important events made the 20th edition of SHARE in Bucharest a day to remember. We’ve had three amazing workshops, all of them meant aimed at teaching attendees that there’s more to architecture than meets the eye.

For noteworthy accomplishments in the fields of architecture, as well as for the role played in developing significant architectural projects throughout his career, this year at SHARE Bucharest 2019 we had the honour to award the “Opera Omnia” SHARE Certificate – on behalf of the Consultative Council of Architects in Central and Eastern Europe – to architect Alexandru BELDIMAN, Founder and Associate Architect at BBM Group. The distinction was handed by  Florin MINDIRIGIU, President of Pro Event Association, Vassilis SGOUDAS, Past President UIA, and Serban TIGANAS, General Secretary UIA.

One of the most awaited events at SHARE Bucharest 2019 was the 3rd edition of RBA (Romanian Building Awards) Gala; a high-end event that awarded future architectural projects in Romania. Following an in-depth analysis of all 60 architectural projects signed up in the competition, RBA board members – made up of presidents of the Constitutive Council of Architects in Central Europe (CCA-CEE) – selected 12 finalists that presented their projects publicly at the 20th edition of SHARE Bucharest 2019 in front of an international jury. Out of the 12 finalists, the jury awarded two projects from two different niches: landscape architecture and industrial buildings.

We would like to take the opportunity to express our gratitude to our official partner at RBA 2019, Saint Gobain and to our media partners Igloo and spatiulconstruit.ro.

To conclude, we would like to thank all of our partners for helping us put together a memorable event at SHARE Bucharest 2019: Saint-Gobain, Sisecam Flat Glass, zumtobel group, REHAU Unlimited Polymer Solutions, Exalco Aluminium Systems, Aluprof Aluminium Systems, Guardian Glass, Skylux, Austrotherm Termoizolatii.